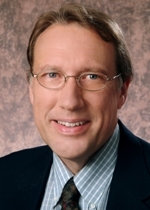 Glen Moberg is a 42 year veteran of broadcast journalism, who serves as a reporter, talk show host, and news bureau chief for Wisconsin Public Radio in Wausau. He has also produced and moderated numerous debates and forums during his career.

Moberg started his career as a rock disc jockey in the Chicago area where he also worked at several TV stations in various roles. He also worked at WAOW ABC-TV in Wausau as assignment manager and speical events coordinator, and was news director and anchor at WSAW CBS-TV, also in Wausau.

During his time at WPR, Moberg has won various awards including best spot news reporting from the Wisconsin Broadcasters Association in 2011. In 2010 he won nine awards, including including three regional Edward R. Murrow awards from the Radio and Television News Directors Association for best writing, best audio feature reporting and best use of sound.

Moberg has been a member of Rotary International since 1982, and has served on the Board of Directors of the Community Foundation of North Central Wisconsin, the Center for Visual Arts in Wausau, and the Marathon County Literacy Council. He lives in Wausau with his wife and two children.