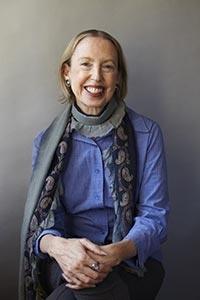 Diane Jacobs is the author of Dear Abigail: The Intimate Lives and Revolutionary Ideas of Abigail Adams and Her Two Remarkable Sisters, Her Own Woman: The Life of Mary Wollstonecraft, Christmas in July: The Life and Art of Preston Sturges, But We Need the Eggs: The Magic of Woody Allen, and Hollywood Renaissance: The New Generation of Filmmakers and Their Works. She has a BA from the University of Pennsylvania and an MFA from Columbia University. Jacobs has taught at Dartmouth College, the Columbia University School of the Arts, and the NYU School of Continuing and Professional Studies, and has contributed to such publications as The New York Times and The Village Voice. She lives in New York City.

Diane Jacobs received an NEH grant, a fellowship to the Camargo Foundation, and was author of a New York Times notable book of 1992.

Like her eighteenth-century subjects, Diane was raised in a suburb near the Atlantic Ocean and has had the luck to be a sister, daughter, mother, and "Dearest Friend." She always wanted to be a writer when she grew up. She now lives in Greenwich Village, New York.