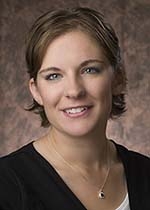 Cynthia Schuster is a fill-in host and producer on Wisconsin Public Radio's Ideas Network. When one of your favorite hosts or producers takes a vacation, Cynthia steps in. You never know when you'll hear her name... or her voice!

Cynthia began her professional radio career as a board operator/announcer on the Ideas Network. In 2006, she went on to produce the nationally-syndicated animal behavior advice show Calling All Pets, hosted by Larry Meiller and Patricia McConnell. Ready to dive into the world of news and politics, she joined The Joy Cardin Show as a producer/director in 2008. She served as WPR's Acting Assistant Talk Director from 2010-2013.

When she's not bringing you the latest in-depth talk show discussions, Cynthia enjoys volunteering around the city of Madison. She serves as the Volunteer Coordinator of the annual Wisconsin Book Festival, and she continues to be an involved member of the University of Wisconsin-Madison's student radio station, WSUM, where she first fell in love with radio. Cynthia is past president of Friends of Madison Student Radio, a non-profit fundraising board that supports the outreach and educational opportunities of the students of WSUM.