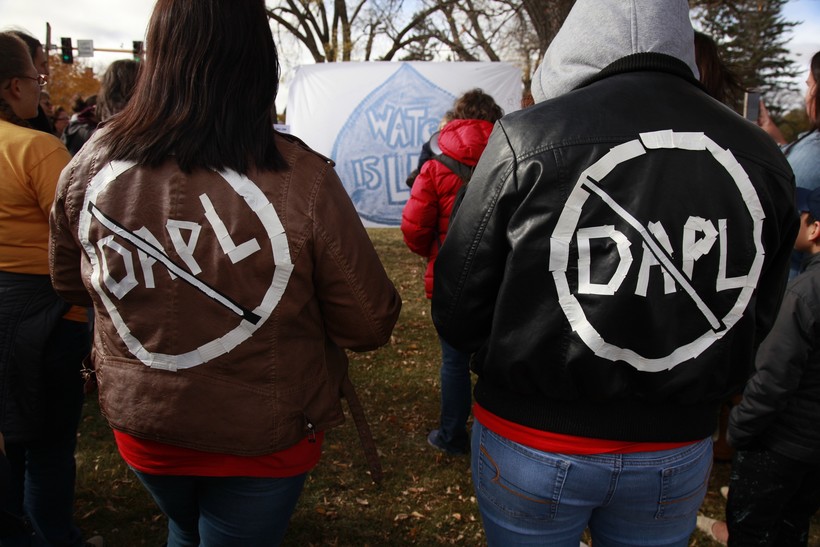 People Are Not 'Standing By And Watching This Happen,' Journalist Says Of Dakota Access Pipeline

The recent arrest of more than 140 people protesting the Dakota Access Pipeline is only the beginning of the intensification between protesters, law enforcement, government and businesses, one commentator says.

Last week, news outlets reported more than 140 protesters were arrested south of Bismarck, North Dakota, as part of the ongoing standoff over the pipeline. And it's estimated more than 260 people have been arrested in recent weeks.

"This is … actually the beginning, I believe, of an escalation of what is going to be direct action and other supportive activities across Indian Country against Dakota Access and the Energy Transfer Partners," said Paul DeMain, managing editor and CEO of Indian Country Communications, a Native American-owned media company based on a reservation in northern Wisconsin.

While much of news cycle recently has revolved around the upcoming presidential election, there have been headlines coming out of North Dakota over the last several months involving protests over the construction of the oil pipeline near the reservation of the Standing Rock Sioux tribe in North Dakota.

Energy Transfer Partners is the company behind the controversial $3.8 billion pipeline stretching through the Dakotas, Iowa and Illinois that protestors and tribal members say would threaten regional water supplies and damage sacred sites.

DeMain said he's been inspired by the amount of people getting involved with the issue and fighting for what they believe in.

"I see lots of people going to North Dakota, I see people very active throughout the community, people who … are passionate about what the future might be, and are just not going to stand for standing by and watching this happen," he said.

When it comes to how the issue of the Dakota Pipeline is playing out on the presidential campaign trail, DeMain said he's disappointed by what he's heard so far from both Democrat Hillary Clinton and Republican Donald Trump.

Trump owns stock in the company building the pipeline, and he has previously called for removal of regulations on the oil and gas industries but has not commented specifically on the Dakota Access project.

"I'd like to see someone stand up for the little people of the Standing Rock Reservation, but I suspect that we're not going to see that from either one of the candidates," DeMain said. "Perhaps after the election, they may have something more to say about it, but right now, I think they consider it too politically risky."

DeMain said he believes there's simple and historic reasoning behind opposition to the pipeline.

"I think people are beginning to question the wisdom of the endorsement of an old extractive industry, something that's getting to the last of everything," he said. "In addition to that, there's been so many breaks and breeches and eruptions over the last few years that environmentalists and indigenous people are certainly concerned about the impact to the water quality."

Protesters have cited an 1851 treaty signed by the United States government and eight tribes. Protesters say the treaty legally gave the tribes the land where the construction of the pipeline is set to take place, but DeMain thinks there's more to it than that.

"There's a historic orneriness over the treaty era," DeMain said. "It leaves a bad taste in the mouths of a lot of indigenous people about how they were left in a small corner of their former homelands."

DeMain hopes the pipeline will bring more people to the table on issues affecting tribes in the U.S.

"I'm hoping that there has to be a dialogue between individuals to understand the deep-seeded, long-term anger that goes into projects that are detrimental to indigenous people that are shoved down onto reservations and around reservations," DeMain said. "At the heart of this thing is the discussion of whether or not foreign owned companies and individuals who are very, very rich are going to force another project down the throats of the poor indigenous people because that's the way things operate."

DeMain is also calling on the U.S. government and companies to engage in more meaningful consultation with tribal governments on future projects to avoid conflict and the possible destruction of culturally sensitive places.

"It's easy to just stamp out our history," he said.