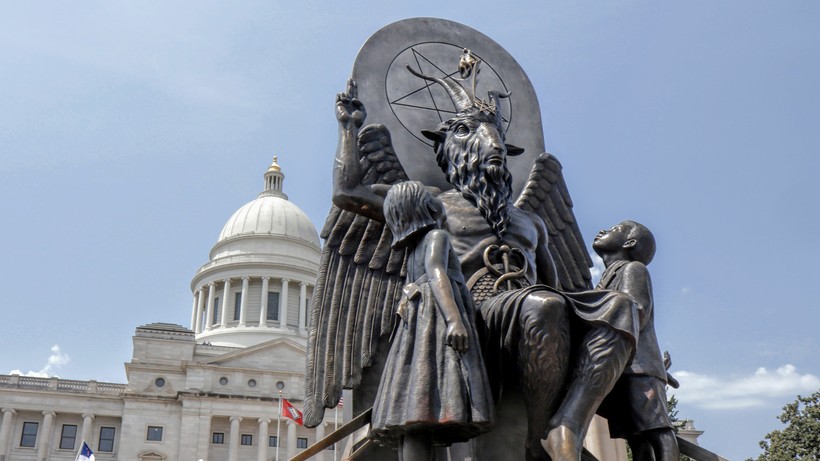 Satanic Temple Redefines What It Means To Be Satanist
By Doug Gordon
Share:

Penny Lane is an indie filmmaker who makes provocative and funny documentaries that explore big ideas. Her latest film is called "Hail Satan?" and it's about a group that calls itself the Satanic Temple but does not actually believe in the existence of Satan.

"Modern Satanists are essentially atheists at their core," Lane told WPR's "BETA." "They don’t believe in spirits in the sky or demons underground. They do believe in the power of myth and allegory and art and ritual. Those are things that we associate with religion that the Satanic Temple and Satanists want to keep. The Satanic Temple wants to start from a position of acknowledging the essential kind of mythological function of religion. So they want to participate in a now 2,000-year-plus cultural conversation we’ve been having that Christianity gave us. These stories that we’re all familiar with, from the Garden of Eden right on.

"And they want to suggest that perhaps Satan is not the bad guy but perhaps Satan is the good guy because Satan stands up to this authoritarian figure, God, and questions these kind of edicts that come from above," Lane continued. "Satan doesn’t fall in line. Satan kind of wants man, wants humankind to seek knowledge and to look to themselves for guidance, not to sort of authoritarian, tyrannical, invisible beings."

Lane's film contains many funny moments, one of which Lane describes as "the origin story of the Satanic Temple, which is somewhat mind-blowing."

In January 2013, some members of the Satanic Temple staged a rally at the Florida State Capitol in Tallahassee.

They showed up to show their support for a bill that then-Gov. Rick Scott had signed into law in 2012 — Senate Bill 98, which allowed students to lead prayers at school assemblies. The Satanic Temple members said that because the bill did not mention any specific religion, the prayers could be led by a student from any religious denomination, including Satanism.

"So it was kind of meant as a satirical kind of stress test to the First Amendment," Lane said. "We say in the First Amendment, the government can’t privilege one religion over another. But within weeks or months of that event, which was very successful and kind of got a lot of media attention, people started showing up and saying, 'How do I join?' So what you see in my film is kind of how could it be that this really, rather silly idea meant as a political prank amongst a few friends in 2013 has blossomed into an internationally-recognized religious movement with over 100,000 members?"

The Rick Scott rally is just one example of the Satanic Temple's ability to manipulate the media.

"They know that if they pull certain kinds of pranks and use certain kinds of images, they’re likely to end up on the nightly news," Lane said. "Probably the campaign the Satanic Temple is most well-known for is their Baphomet campaign.

"So this is a case where in Oklahoma, a big monument to the Ten Commandments was put up. And the Satanic Temple ... kind of showed up and said, 'Great, now that you opened up this state house lawn to religious monuments, we would like to place our religious monument next to the Ten Commandments.' And the monument they designed was a 9-and-a-half-foot tall kind of goat-headed, angel-winged, sort of partly male, partly female figure that incidentally has Iggy Pop’s chest."

"Jex was very involved in the Satanic Temple from the very beginning," Lane said. "She’s based in Detroit. She’s an incredible artist. She’s an incredibly inspiring and charismatic person. She is no longer with the Temple. The reason for her leaving the Temple is covered in my film. And it essentially boils down to difference in tactics. Do you want to be the kind of Satanist who works within the system or do you want to be kind of Satanist that wants to kind of rebel from a position outside the system? And you see that conflict play out in my film."

Instead of the Ten Commandments, the Satanic Temple has seven fundamental tenets.

"The seven tenets are the kind of baseline, doctrinal text of The Satanic Temple," Lane explained. "The first one is 'One should act with compassion and empathy towards all creatures in accordance with reason.'"

"And I haven’t memorized them all," she continued, "but the seven tenets emphasize things such as the importance of aligning your beliefs with the best scientific evidence; the willingness to change your mind in the face of new information; the importance of standing up for what’s right, the struggle for justice being an ongoing and necessary pursuit that is more important than laws and institutions in certain cases."

Who are the members of the Satanic Temple and what do they have in common?

Lane's role model is the anonymous British street artist, Banksy, and she is an avid fan of his 2010 documentary, "Exit Through the Gift Shop." So how did that influence her approach to making "Hail Satan?"?

"I think that I really want to make films that are about really big ideas, like the biggest, most important philosophical ideas of our time," Lane said. "But I want to do it in a way where nobody notices that’s what I’m doing. I really want my audience to just have fun and be entertained and laugh and feel joy in their heart and really only later realize the tremendous amount of intellectual labor they have just expended."