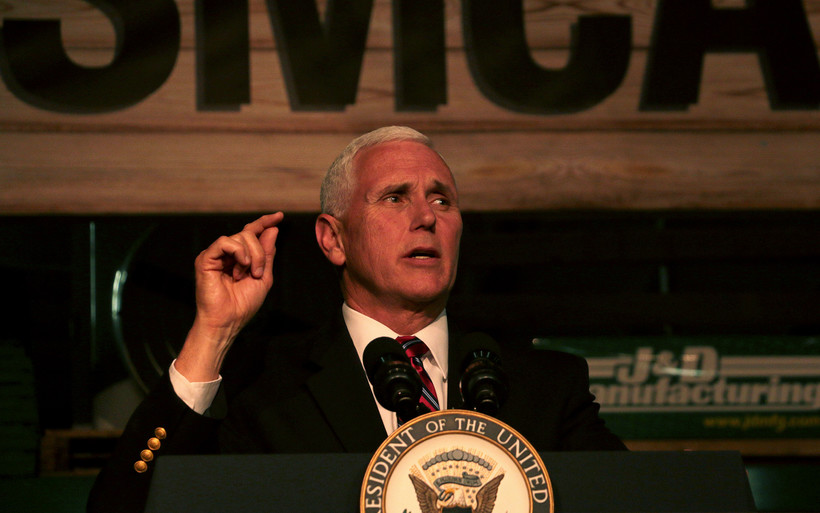 Vice President Mike Pence was in Altoona Thursday to drum up support for a new trade agreement between the United States, Mexico and Canada.

The agreement, known as the United States-Mexico-Canada Agreement would replace the North American Free Trade Agreement, which was enacted in 1994. President Donald Trump has long railed against NAFTA calling it the worst trade deal in history and arguing it disadvantages U.S. companies in favor of those in neighboring countries.

Pence took part in a roundtable with manufacturers at J&D Manufacturing in Altoona before speaking to supporters. He told the crowd the trade agreement will bolster dairy farming in Wisconsin.

"The USMCA is actually going to end programs in Canada that allow low price products to undercut the incredible dairy farmers here in Wisconsin," said Pence. "The USMCA is a win for Wisconsin dairy and American dairy and we need it to pass."

Pence was joined on stage by U.S. Department of Agriculture Deputy Secretary Stephen Censky who elaborated on the changes required of Canada in the agreement.

"The USMCA eliminates Canada’s discriminatory Class 7 pricing policy that really negatively affected our ability to export our dairy products into Canada as well as export them around the world," said Censky. "It also reforms their dairy supply management program and creates new market access opportunities for poultry and eggs and it addresses their discriminatory wheat pricing policy as well."

The USMCA has been signed by Trump, former Mexican President Enrique Peña Nieto and Canadian Prime Minister Justin Trudeau. But before taking effect it must be ratified by Congress and legislative bodies in Mexico and Canada. Some congressional Democrats have been critical of the deal. But a recent meeting between Trump’s top trade official Robert Lighthizer and U.S. House Speaker Nancy Pelosi has led some to believe a deal may be possible this year.

Pence encouraged supporters in Altoona to urge their congressional delegates to approve the USMCA to speed the ratification.

Wisconsin farmer groups including the Wisconsin Farm Bureau Federation, Dairy Business Association and others have called for an end to U.S. tariffs and the approval of the USMCA trade agreement. They’ve said the trade instability created by tariffs has placed a heavy burden on American agricultural producers.