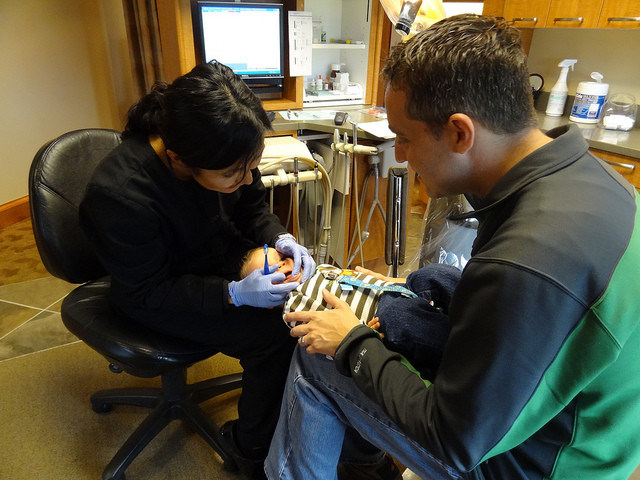 Pediatricians, Dentists Push For Babies To Get Teeth Examined Earlier

Effort Is Due To Increase In Cavities, Early Childhood Caries
By Shamane Mills
Share:

Groups representing dentists and children's doctors in Wisconsin are teaming up in an effort to get infants’ teeth examined by age 1 and to educate parents on why baby teeth matter.

For pediatricians, a young patient's tooth problems used to be limited to teething. Now, as cavities become an increasing concern, doctors are being urged to do oral exams and fluoride applications for vulnerable patients.

“Tooth decay in baby teeth is painful,” said Jeffrey Britton, president of the Wisconsin chapter of the American Academy of Pediatrics. “It causes a fairly significant amount of nutritional problems because kids are not able to chew normally.”

Typically, dentists start seeing patients when they turn 3. Cliff Hartmann, a trustee of the Wisconsin Dental Association and professor of dentistry at Marquette University, said that the reason behind the push to get children examined earlier is a form of tooth decay called early childhood caries.

“I take three children a week to the operating room at age 3 because of this disease,” he said.

Medicaid does pay pediatricians to apply fluoride to a young patient's teeth. Access to dentists, however, has been an ongoing problem for patients of all ages. Some dentists do not accept Medicaid because of low reimbursement rates.