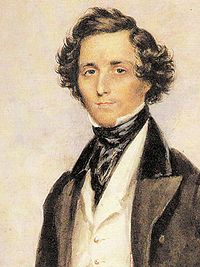 Felix Mendelssohn conducted the Düsseldorf revival of Luigi Cherubini’s opera The Water Carrier. A letter that he wrote to his father on March 4, 1834, shows how hard he worked to get the performance right:

A good performance in the Düsseldorf theater does not find its way to the general public–in fact rarely beyond the Düsseldorfers themselves.  But if I succeed in thrilling and rousing my own feelings and those of everybody in the house who’s in favor of good music, that’s worthwhile too.

The week leading up to the performance of The Water Carrier was exhausting.  Every day we had two long rehearsals, nine or ten hours typically, plus the preparation of the church music for the week, and I was supposed to supervise everything–the acting, the sets, and the dialogue–or the whole thing would’ve faltered.  So on Friday I came from my desk feeling a little worn out.  We had been committed to a complete dress rehearsal in the morning, and my right arm was quite stiff.

The audience hadn’t seen or heard of The Water Carrier for fifteen or twenty years, and had the idea that it was some old forgotten opera, which the committee felt like reviving, and so everyone on stage felt very nervous–which turned out to be just the right mood for the first act.  The emotion and excitement were so stirring that by the second piece of music the Düsseldorf resistance burst into enthusiasm, and at one time or another, everyone applauded and shouted and wept.

It has been quite a while since I have had such a wonderful night at the theater, for I participated in the performance just like an audience member, and laughed and applauded and cried out “bravo” while conducting enthusiastically the whole time.