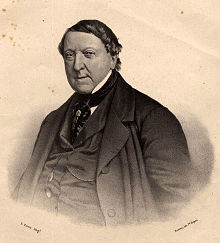 In his 1824 biography of the composer, Stendhal describes an 1818 performance in Naples of Gioachino Rossini’s opera Moses in Egypt. Stendhal was leery of the opera, thinking that he might be setting himself up to see a musical version of the Inquisition.

Stendhal was quite taken with the overture, but when the curtain rose on the Plague of Darkness, he burst out laughing at the sight of “wretched little groups of Egyptians” praying furiously as they bumbled around in the dimness of the vast stage.

A bass named Benedetti singing the part of Moses won Stendhal back with the power of his voice, but, during the third act, the special effects tipped from the sublime to the absurd.

The librettist had included the Israelites’ crossing of the Red Sea in the opera, which put no small burden on the stage manager. The assignment was all the more difficult because the parting and crossing of the sea was to be accomplished at the front of the stage.

The effect of the resulting stagecraft depended upon the view of the beholder.

Seen from the pit, the Red Sea rose to an impressive height of five or six feet above its theatrical shoreline, but as those in the boxes looked down on tossing waves, they got a peek at the little lower-class Neapolitan stage hands whose job it was to part the sea at the sound of Moses’ command.

Apparently, Neapolitan audiences were inclined to make fun of cumbersome stage machinery anyway, and the tossing seas encountered a gale of laughter.

The merriment was so frank and so forthright, Stendhal remarked, that no one had the heart to take serious issue with the clumsy seas.

And besides, he concluded, hardly anyone in the audience was listening to that part of the opera because they were still chatting about the wonderful overture.