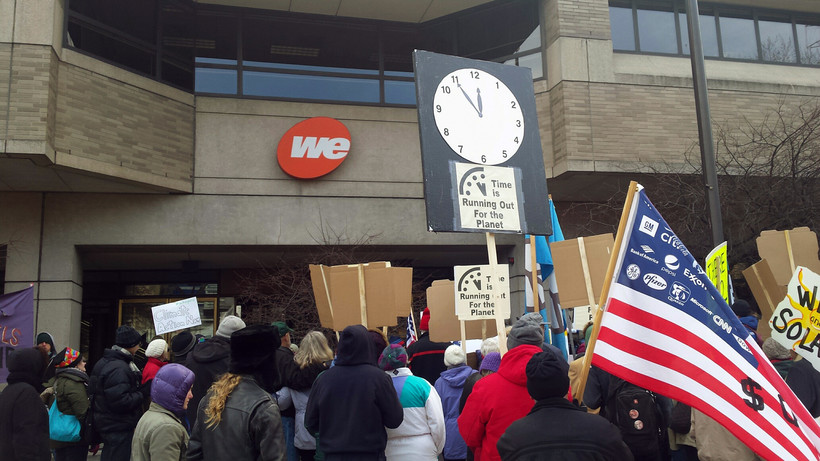 A climate change rally in Milwaukee last weekend included a march to the headquarters of We Energies.

While Many Activists Want Strong Action On Climate Change, Others Favor A Slower Approach
By Chuck Quirmbach
Share:

​The United Nations climate summit in Paris comes at a time when the debate over carbon emissions in Wisconsin has many people falling into one of two camps: those who want strong action to reduce emissions, and those who favor more of a "go-slow" approach.

Take Carl Siegrist: He, along with about 200 others, attended a rally in Milwaukee last weekend to urge Paris negotiators to come up with a plan that would substantially cut back carbon dioxide emissions.

Siegrist used to work on renewable energy projects for the state's largest utility, We Energies, until the company eliminated his position. Now a solar consultant, Siegrist said he's optimistic about reducing use of fossil fuels.

"Efficiency always has to come first," he said. "There's a lot of inefficiency in our energy system. I think you combine that with a lot of renewables."

Siegrist added that he's "bullish" on renewable energy storage — he thinks there will be a lot more of it in a decade or so. Better storage of energy generated by the solar panels or wind turbines is considered vital to a more consistent supply of green power.

Others, like Siegrist's former employer, favor converting more coal-burning power plants to cleaner-burning natural gas. We Energies recently completed the conversion of the two generating units at its Valley Power Plant near downtown Milwaukee, adding a network of yellow pipes that take natural gas to the plant's boilers. Tom Metcalfe said switching to natural gas isn't in the cards for every power plant.

"Cast your mind back to the polar vortex," he said. "We had a very challenging period getting coal to some of our facilities, and we relied heavily on our natural plants during that time period. But you can't put everything into gas. It's just not a great strategy. You've got to be diverse."

Metcalfe said that in part because of the need for energy diversity, We Energies wants Wisconsin to apply for a two-year delay in implementing the plan. But even some agnostics on climate change say blocking the Clean Power Plan means the U.S. would miss out on other gains from the federal rule.

Mount Pleasant resident Bill Pringle said that when his family lived in Caledonia, close to the We Energies coal-fired plant in Oak Creek, his loved ones suffered from asthma and other severe breathing problems. He said if the federal government targets carbon dioxide — and in the process, reduces power plant emissions of soot — that would be a plus.

Pringle said he's not sure if the politicians speaking in Paris this month are just courting votes. While the talks in France go on, he'll continue to circulate a petition calling for the massive Oak Creek plant to be switched to natural gas.