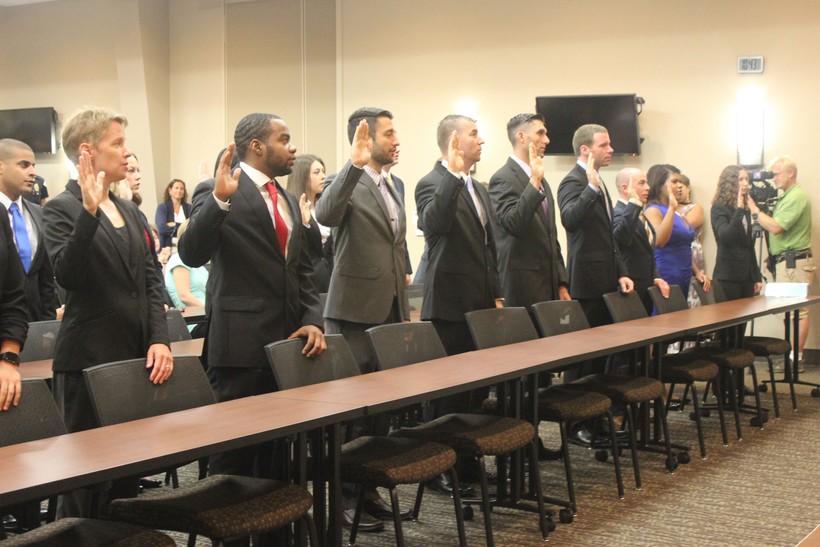 Members of the 59th class of the Madison Police Department Training Academy are sworn in Monday, Sept. 12, 2016.

Madison Police recruit Gracia Rodriguez came to the United States when she was just 6 years old on a tourist visa, which eventually expired. Her family then decided to stay in the country illegally.

"We didn't have that many opportunities back in Mexico," she said. "So we stayed."

Eventually, she gained residency and then citizenship. Within the recruit class, she said, her experience is unique.

"A lot of my classmates had never been exposed or had never learned about immigrants and undocumented people," Rodriguez said. "So it's interesting to see how they're shocked, how they realize that 'Yes ... maybe I do have this white privilege and what other people are going through I've never heard of or seen of before.'"

How law enforcement and undocumented immigrants around the U.S. interact is a controversial issue, and was featured prominently in the 2016 presidential election. And, as part of the Madison Police Department Training Academy, 23 of this year's officers-in-training learned about what issues immigrants face from members of the Latino community.

Before the academy started in September, the recruits all read "Lives in Limbo: Undocumented and Coming of Age in America" by Roberto Gonzales, which documents a study of undocumented young adults in Los Angeles. Then, the recruits participated in a panel discussion of the book in early December with leaders from Madison’s Latino community.

The panel included Veronica Lazo of UNIDOS Against Domestic Violence, immigration attorney Ramona Natera and Karen Menendez Coller of Centro Hispano. It was the first time the academy had a panel and book dedicated to discussing law enforcement's relationship with immigrants.

Madison Police Department Lt. Tim Patton, who was a training sergeant until the end of 2016, said the goal was to help the recruits start building relationships.

"On a most simple level, it might simply be understanding how one's immigration status or having a family member with undocumented status will potentially impact our ability to talk to one another," he said.

Madison Police Chief Mike Koval reiterated after the election that the MPD does not act as an immigration authority. The department's Code of Conduct forbids officers from asking people to show immigration documents, except in cases when when they’re assisting Immigration and Customs Enforcement. But when non-citizens are fingerprinted, identified and booked into the Dane County Jail, ICE is automatically notified through the National Crime Information Center Database system.

Still, navigating these relationships is new for many of the recruits. They asked questions of the city leaders about how immigrants perceive officers and what fears immigrants may have. The panel members said these conversations are important, because there's still there’s still a lot of built-in mistrust of law enforcement within the Latino community.

Patton said he hopes the conversation helps the recruits be more respectful and empathetic.

"For us, it's really that they walk up to the door with more understanding, and they'll spend a little bit more time trying to get to know each other, and they come into it just with more knowledge and compassion about that citizen and why they might be getting the response they're getting," he said.

Panel member Laura Minero co-founded the advocacy organization DREAMERS of UW-Madison. She was 5 years old when her parents handed her off to another family to make the crossing from Mexico, and they reunited after. She, an undocumented immigrant, told the recruits she has feared law enforcement for most of her life.

"That fear of once you come into contact with law enforcement you're going to be deported," she said. "That fear that you're going to be taken away from your kids and what's going to happen to your kids, are they going to go into foster care? The list of fears just go on and on, and it certainly prevents people from reporting crimes that they're victim to," Minero said.

Minero came to the training center in a squad car with two officers, and they stopped at Starbucks to get hot chocolate on the way there. Even though she knew she was safe, she still felt a tiny bit fearful.

"I think some of that stuff I had internalized for a long time," she said. "Part of me even questioned like, oh where are they taking me? Can I trust them?"

But when she walked into the training center, she said she felt like she was walking in with the officers. In some ways, she said, speaking on the panel transformed her personal perception of police.

"I think the work just needs to be done on both ends in breaking down the stigmas and the stereotypes that we have about each other, and I think that's key and crucial in any work that we do when we build allyship and understanding across communities," Minero said.