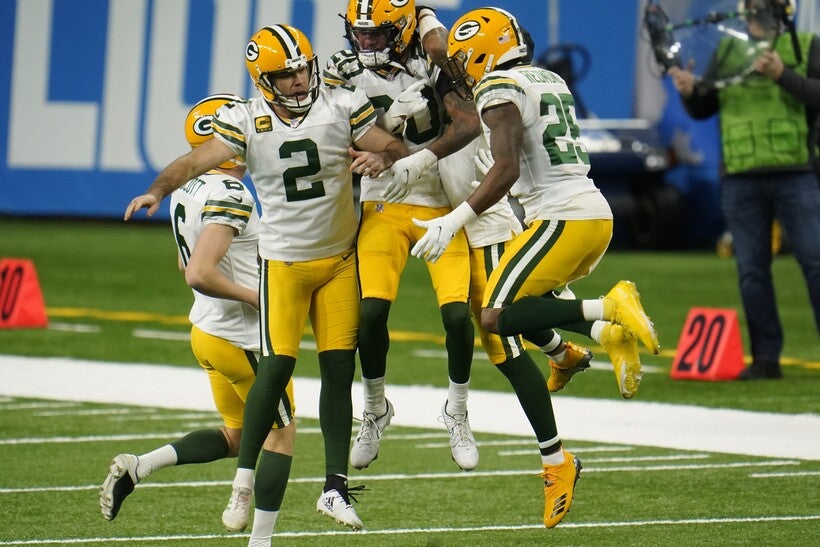 Green Bay Packers kicker Mason Crosby (2) celebrates his field goal with teammates during the second half of an NFL football game against the Detroit Lions, Sunday, Dec. 13, 2020, in Detroit. Paul Sancya/AP Photo

Packers Take Control Of NFC But 'We're Definitely Not Done'

Rodgers Has Played In 4 NFC Title Games, None At Lambeau Field
By Megan Hart
Share:

In his seven years with the Green Bay Packers, wide receiver Davante Adams has donned lots of NFC North Champions gear, he said.

When he spoke to reporters Sunday after the Packers beat the Detroit Lions to clinch the division, his shirt read: "WON NOT DONE." With the win, Green Bay took a big step toward securing homefield advantage in the upcoming playoffs, but the Packers aren’t planning to let up, Adams said.

"It’s basically just about finishing the season strong, not taking any of these last games light and taking care of business," he said.

If the Packers win their three remaining games against the Carolina Panthers, Tennessee Titans and Chicago Bears, they’re ensured homefield advantage throughout the playoffs and a first-round bye.

The Packers have played in three NFC Championships during Adams’ tenure with the team, but Adams is yet to play in a Super Bowl. The experience has taught him that you can’t take things for granted, he said. 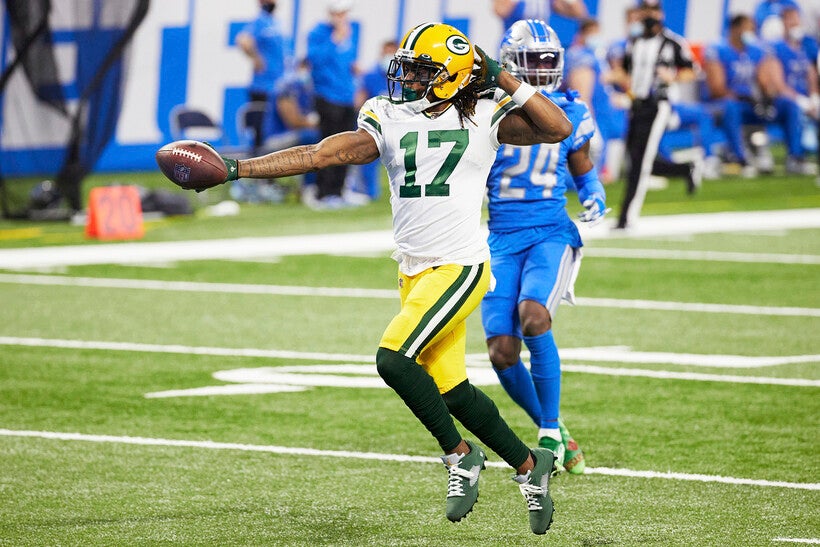 "We’re definitely not done, we’ve got a lot more work to be put in and get where we ultimately want to be," he said.

The extra rest that comes with the bye week is important and so is homefield advantage, said quarterback Aaron Rodgers. He’s played in four NFC Championships — none at Lambeau Field.

"Being able to have the whole thing come through Green Bay is something that we’ve talked about for a long time, we’ve wanted, but we’ve never had," Rodgers said. 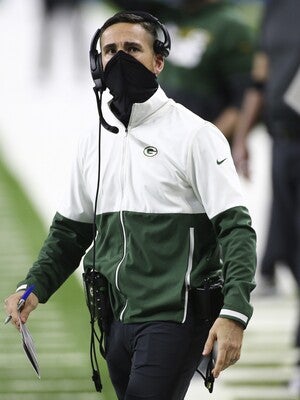 Green Bay Packers head coach Matt LaFleur looks to the scoreboard during the first half of an NFL football game against the Detroit Lions, Sunday, Dec. 13, 2020, in Detroit. In just two seasons with the Packers, LaFleur has led the team to two NFC North titles. Leon Halip/AP Photo

It’s unclear exactly what kind of crowd the Packers could welcome during the playoffs. The team announced last week it would limit attendance to staff members and their families through the rest of the regular season. Still, Green Bay’s hostile January weather and not having to travel would benefit the Packers, Rodgers said.

Last season, the Packers lost to the San Francisco 49ers in the conference title game, but this year’s team has an offensive prowess last season’s Packers didn’t possess. Green Bay is leading the league in points scored, and Rodgers is an MVP contender.

"I just feel really good about our team, but again, we’re going to focus one day at a time," head coach Matt LaFleur said after Sunday’s win.

Rodgers had three touchdowns and 290 yards in Green Bay’s 31-24 win over Detroit. The Packers also got help Sunday from the Philadelphia Eagles, led by rookie quarterback Jalen Hurts. In his first start, Hurts and the Eagles beat the New Orleans Saints.

Going into Week 14, the Saints were leading the NFC. Now both Green Bay and New Orleans are 10-3, with the Packers holding the tiebreaker after beating the Saints in Week 3.