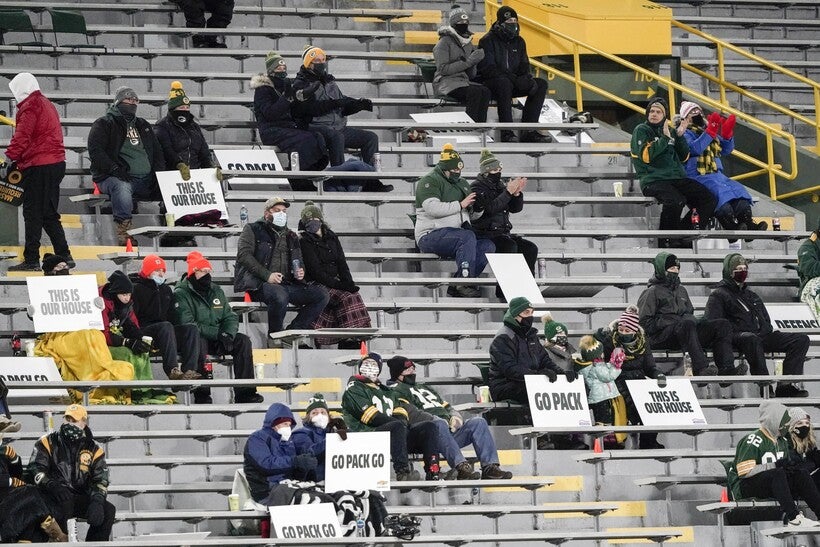 A limited number of fans at Lambeau Field watch during the first half of an NFL football game between the Green Bay Packers and the Chicago Bears Sunday, Nov. 29, 2020, in Green Bay, Wis. Morry Gash/AP Photo

Packers Sell Out Home Playoff Game, First Of The Season With Fans

Lambeau Field will welcome paying fans for the first time this season when the Green Bay Packers host the Los Angeles Rams for their Divisional Round playoff game Saturday.

Tickets went on sale Tuesday morning, and were only available to season ticket holders who opted in before the start of this season, according to a news release from the team. Fewer than three hours after they became available, the Packers announced tickets were sold out.

The Packers plan to host about 6,000 ticketed fans — accounting for less than 10 percent of the stadium’s capacity. Invited health care workers and first responders will also attend the game, according to a news release from the team.

Dave Shambeau, from Waupaca, hasn't missed many Packers home games since he became a season ticket holder about five years ago. His wife was able to log into Ticketmaster and snag six tickets for their family to attend Saturday's match up, he said.

"I'm feeling pretty good about getting to go. It's been a long time. We went to the Seattle Seahawks playoff game about a year ago and you never would have guessed it would be another year before you get to go again," he said.

It wasn't a difficult decision when the team asked season ticket holders to opt in or out for this year due to the pandemic, Shambeau said.

He's not worried about the coronavirus when it comes to attending Saturday's game, he said. His family has already had it, plus the game will played outside and everyone will be bundled up due to the cold, he said. There were about 15,000 fans at Hard Rock Stadium in Miami for Monday night's college football national championship, and there appeared to be plenty of space between groups, Shambeau noted.

At the Packers game, fans will sit in socially distanced pods of two, four or six people. Tickets can’t be resold. In fact, the season ticket holder who purchased the seats must be in attendance for their group to enter, according to the team.

Inside the stadium, fans will be required to wear face coverings, concessions will be cashless and the concourse will be set up for one-way traffic, according to the team.

The Packers hosted invited fans at their last four regular season home games. In a statement, president and CEO Mark Murphy said the team feels confident the protocols it practiced at those games will translate to a safe event Saturday.

"Our players have enjoyed the energy provided by the limited fans we've had over the past four games," he said. "We're looking forward to welcoming our season ticket holders to add to that atmosphere in the playoffs."

If Green Bay wins Saturday, the Packers will host the NFC Championship game against either the New Orleans Saints or the Tampa Bay Buccaneers Sunday, Jan. 24.

Though Saturday will mark the first time ticketed fans visit Lambeau Field this season, across the country more than 1 million spectators have attended more than 100 NFL games during the coronavirus pandemic. According to the Packers, local health departments haven’t linked outbreaks to any of those events.

"Clearly this is not the same as a normal playoff game. The crowds will be much smaller than what they have been," said Wisconsin Department of Health Services Deputy Secretary Julie Willems Van Dijk, who encouraged fans to wear masks, maintain their distance, wash their hands and avoid tailgating, which the team has prohibited in the Lambeau Field parking lots.

Saturday's game will be a test to see how well fans follow protocols, she said.

The Packers worked with Brown County public health officials and their partners at Bellin Health to set the fan policies for Saturday's game.

"The regular-season games have demonstrated the precautions in place will prevent further spread of the virus, and we hope this will continue to demonstrate that while we may have to make adjustments to coexist with the virus, it is possible to make the necessary changes that will allow us to stop the spread as a community," infectious disease specialist Dr. Michael Landrum, of Bellin Health, said in a statement.

The Packers also asked those not attending the game to abide by public health guidelines when they watch it on television.

'Any Little Bit Of A Boost Is Very, Very Welcome'

Shambeau and his family plan to stick to their usual routine when they travel up for Saturday’s game. They typically park in a lot about six blocks from Lambeau Field, he said.

After a beer, they’ll head to Kroll’s West, a restaurant near the stadium.

Brad Toll, president and CEO of the Greater Green Bay Convention & Visitors Bureau, said restaurants and hotels across the area have adopted new safety policies in response to the pandemic, with input from Brown County and state health officials.

"We're absolutely ready to welcome all of the fans that are comfortable coming into the community and attending the game, and we just ask that they do follow the guidelines that are laid out by the restaurants and the hotels, which include masking, of course, and washing hands regularly and the things that we're all very familiar with," he said.

Typically, a Packers home game injects about $15 million into the local economy, Toll said. But the economic impact of Saturday’s playoff game is hard to estimate. Given the unusual circumstances this year, it’s tough to know whether most tickets went to local fans or if people will travel for the game, he said.

This year’s playoffs will be different for Green Bay’s hotels and restaurants. Still, the city is decked out in green and gold, and the area’s hospitality industry is excited some fans will be at Saturday’s game, Toll said.

"It's been a very difficult year for tourism, so any little bit of a boost is very, very welcome at this point," he said.

As Wisconsin's COVID-19 vaccine rollout continues, Toll said he’s optimistic leisure travel, and later this year, the convention industry, will pick up too.