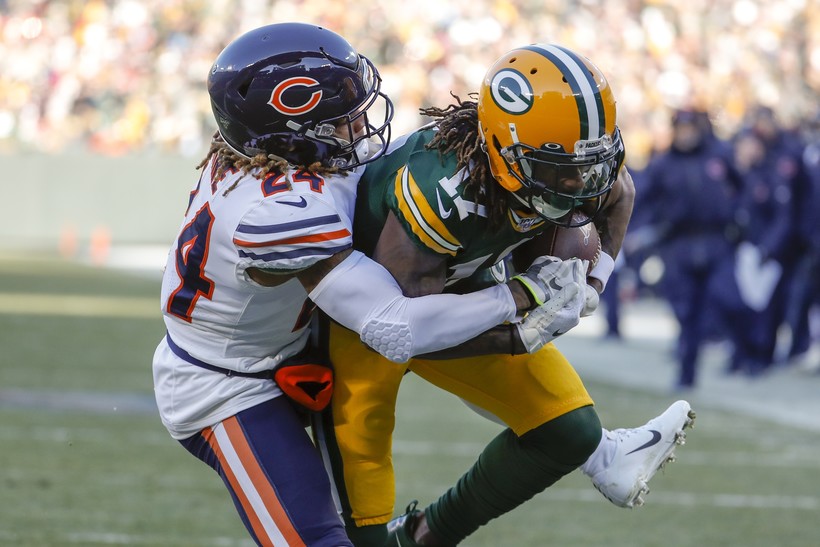 Davante Adams of the Green Bay Packers catches a touchdown pass in front of Chicago Bears' Buster Skrine during the first half of an NFL football game Sunday, Dec. 15, 2019, in Green Bay. AP Photo/Matt Ludtke

Packers Get Closer To Playoffs, NFC North Title With Win Over Bears

It turned into a close one for the Green Bay Packers against the Chicago Bears on Sunday, but now it's time for Packers fans to turn their attention to Dallas.

The Packers beat the Bears 21-13 on Sunday, taking them one step closer to clinching a postseason berth. If the Dallas Cowboys beat the Los Angeles Rams Sunday afternoon, the Packers are officially in. Green Bay needs to win one more game to clinch the NFC North. If they win out, the Packers can earn themselves a first-round bye.

The temperature was 18 degrees for kickoff between the Packers and Bears at Lambeau Field. Green Bay's defense got off to a strong start. Defensive tackle Kenny Clark was on the cover of Sunday’s game program. He set the tone for Green Bay’s defense with a tackle for a loss and a sack in the first seven minutes.

The Packers missed a chance to strike early when wide receiver Marquez Valdes-Scantling dropped what could have been a touchdown pass in Green Bay’s opening offensive series. The Packers made up for it on their second drive. On fourth and 4, quarterback Aaron Rodgers connected with wide receiver Davante Adams for a 29-yard score.

Adams missed four games earlier this season with a toe injury. He’s been getting things back on track with four touchdowns in four games including Sunday’s first-quarter grab. He finished the game with 103 yards on seven catches.

Packers linebacker Rashan Gary got the second sack of his career at the right time Sunday. The Bears' offense, led by quarterback Mitch Trubisky, was pushing toward the end zone at the end of the first half. The Packers defense was able to hold them to a field goal, bringing the score to 7-3 at halftime.

Green Bay opened the second half with a touchdown drive that included a 17-yard run by Rodgers, his longest of the season. Running back Aaron Jones finished it off for the Packers with a 21-yard carry. With 830 yards on the season, including 51 on Sunday, he could be the first Packer to top 1,000 rushing yards in a season since Eddie Lacy in 2014.

Packers wide receiver Jake Kumerow got in on the action in the following series with a 49-yard play that saw him dodging Bears defenders. Another rushing touchdown by Jones put Green Bay up 21-3.

The Bears tacked on a field goal and a touchdown early in the fourth quarter, while Rodgers and the Packers' offense struggled to run down the clock. Trubisky threw an interception to Packers defensive end Dean Lowry with just over six minutes left in the game. Green Bay couldn't move the ball on the ensuing possession, but Packers punter J. K. Scott was able to pin the Bears inside their own 5-yard line. Chicago managed to get the ball to midfield, but couldn't convert on fourth and 10 with 1:42 left in the game.

After a three-and-out by the Packers, the Bears got the ball back with 36 seconds remaining and no time-outs left. The Packers held on for the win.

Going into Sunday’s game, the Bears were playing their best football of the season. They were 4-1 in their last five games heading into Lambeau. This was the record 200th matchup between the Packers and the Bears. They faced off in the first game of this season to commemorate the 100th anniversary of NFL football. The Packers won that game 10-3 at Soldier Field.

Next up, the Packers will head to Minneapolis for a Monday night matchup against the Vikings on Dec. 23. The Vikings, 9-4 through week 14, sit in second place behind the Packers in the NFC North. Monday night games have been an Achilles' heel for Vikings quarterback Kirk Cousins. Cousins is among the top quarterbacks in the NFL in terms of quarterback rating and completion percentage this season, but he’s 0-8 on Monday nights for his career. Green Bay fans will hope that trend continues.