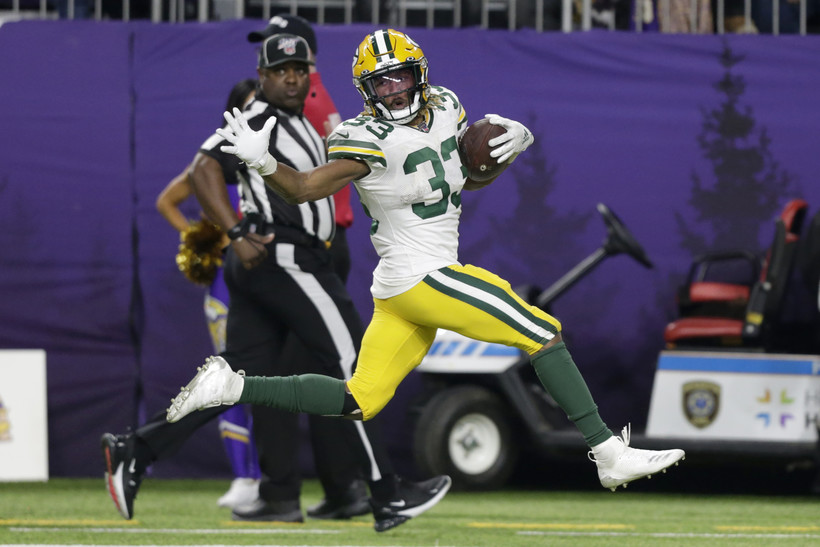 Green Bay Packers running back Aaron Jones runs for a 56-yard touchdown during the second half of the team's NFL football game against the Minnesota Vikings, Monday, Dec. 23, 2019, in Minneapolis. Andy Clayton-King/AP Photo

Sporting fresh division title shirts that few expected them to wear this year, the Green Bay Packers had the message printed across their chests in the jubilant visitors' locker room: "The North is not enough."

With Aaron Rodgers taking a back seat while the ground game and the pass rush led the way, the Packers became NFC North champions for the first time in three years and delivered Minnesota's first defeat at home this season.

Aaron Jones rushed for 154 yards and two second-half touchdowns, Za'Darius Smith had five tackles for loss to lead a stifling performance by the defense, and the Packers beat the Vikings 23-10 on Monday night.

"There's really nothing like checking that first box on the goal list," said Rodgers, who was picked off without throwing a touchdown pass for the first time in 18 games. 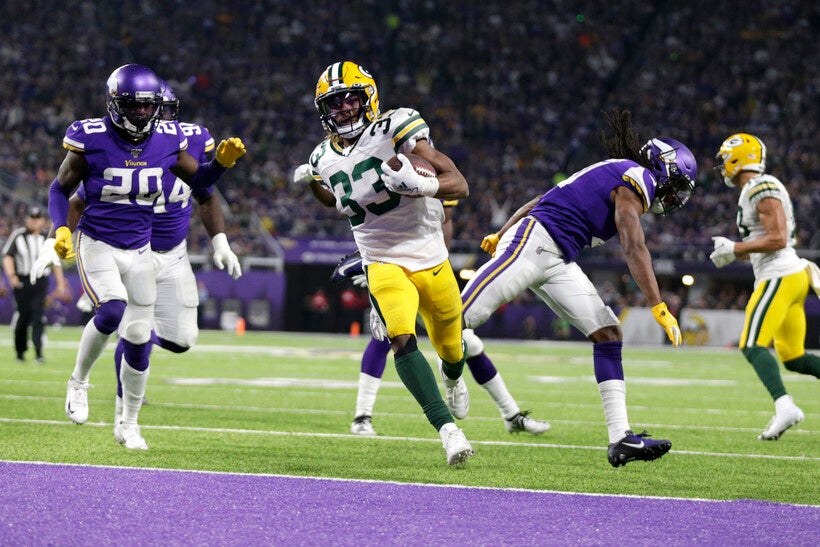 Green Bay Packers running back Aaron Jones (33) scores on a 12-yard touchdown run during the second half of the team's NFL football game against the Minnesota Vikings, Monday, Dec. 23, 2019, in Minneapolis. Andy Clayton-King/AP Photo

The Packers (12-3) made Matt LaFleur the 10th rookie coach in NFL history to reach 12 victories, winning for the first time in four tries at U.S. Bank Stadium with a dominant finish after trailing 10-9 at halftime. Green Bay stayed in position for a first-round bye in the playoffs, and the top seed — with home-field advantage until the Super Bowl — is still in sight.

"Like I’ve been telling the guys the last few weeks, the only thing I want for Christmas is a hat and a T-shirt, and they came through with it, man," said Smith, the team's top free agent signing. "My Christmas gift is here already. I’m happy."

The Packers stormed back from three first-half turnovers, including the rare interception by Rodgers, to silence the deafening crowd and seal the Vikings (10-5) into the sixth playoff seed. The green-and-gold-clad fans in attendance squeezed some "Go, Pack, Go!" chants in during the ample down time as the Packers took control in the second half.

Kirk Cousins was sacked five times, with a whopping 3 1/2 by Smith, and he threw an interception in the third quarter that set up the first score by Jones, who leads the league with 16 rushing touchdowns. The Vikings had 132 total yards, as Cousins fell to 0-9 in his career in Monday night games.

"When you don’t convert third downs, go three-and-out, you just don’t have that many plays. You don’t have many bites at the apple to get going," Cousins said. "We certainly did not play well enough from start to finish."

The Vikings had only seven first downs and never netted a drive longer than 31 yards in this concerning regression. They wasted a fine performance by their defense, which has produced 10 turnovers in the last two games.

"Give Green Bay some credit. They did some good things, and that’s what happens when you don’t play as good as you can," Vikings coach Mike Zimmer said. 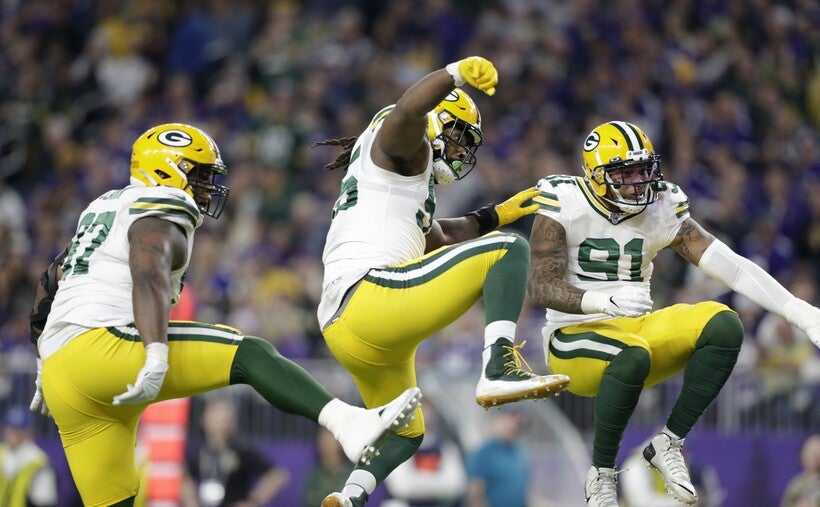 Minnesota's frustration over a stalled offense that averaged nearly 30 points over the previous 10 games only increased in the second half. Stefon Diggs caught a 28-yard pass on third-and-18 in the third quarter, but Cousins was intercepted later on the drive when Diggs was tangled up with Jaire Alexander and Kevin King made a leaping grab before a 39-yard return.

The Vikings punted on fourth-and-1 from their 45 to white-flag their ensuing possession.

Cousins cost Minnesota the completion of a comeback from a three-touchdown deficit at Green Bay on Sept. 15, when his second interception of the game, also by King, came on an off-balance throw into end-zone coverage on first-and-goal late in the fourth quarter of a 21-16 defeat. Since that iffy first month of the season, Cousins had played as well as nearly any quarterback in the league to help the Vikings clinch a spot in the playoffs when the Los Angeles Rams lost Saturday. That was by far the best thing to happen to them this weekend.

"It’s pretty frustrating that we lost, regardless if we’re in the playoffs or not. You want to win games convincingly," said Diggs, who caught a second-quarter touchdown pass from Cousins three plays after Anthony Harris picked off Rodgers by darting in front of Davante Adams.

Packers defensive coordinator Mike Pettine again schemed awfully well against Cousins and the Vikings, keeping his outside linebackers extra wide to prevent the rollouts and screens that Cousins excels with. Third-string running back Mike Boone, in his first NFL start with Dalvin Cook and Alexander Mattison both out with injuries, was mostly bottled up. Cousins was just 4 for 12 for 39 yards in the first half.

"The defense played out of their minds. Za’Darius, I don’t even know what to say," said Adams, who had 116 yards on 13 catches. 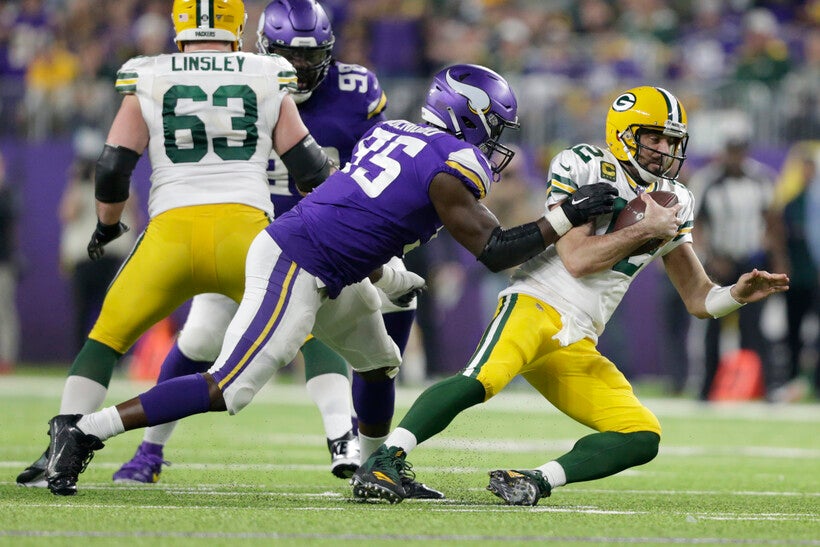 With a plus-59 scoring margin in the first quarter entering this game, Rodgers and the Packers have often raced out of the gates this season, hitting their snags later in games. This start was bumpy, though.

Jones fumbled when Anthony Barr wrangled him down on a short catch at on the first drive, and Eric Kendricks returned it to the Green Bay 10-yard line. Adams lost a fumble and later dropped a pass in the end zone right before halftime, forcing the Packers to settle for Mason Crosby's third field goal.

Rodgers threw 30 passes in the first half and gained just 158 yards off them. His streak of 277 consecutive attempts without an interception was the longest in the league this season, dating to the Oct. 14 game against Detroit.

Packers: Backup FS Will Redmond (hamstring) was hurt in the second quarter and did not return. ... Backup RB Jamaal Williams (shoulder) was injured in the third quarter.

Vikings: Kendricks (quadriceps) departed after his second fumble recovery late in the second quarter. ... Barr limped off with an injury to his left leg, right before the second touchdown by Jones.

Vikings: Host Chicago on Sunday, their fourth consecutive regular-season finale at home against the Bears.