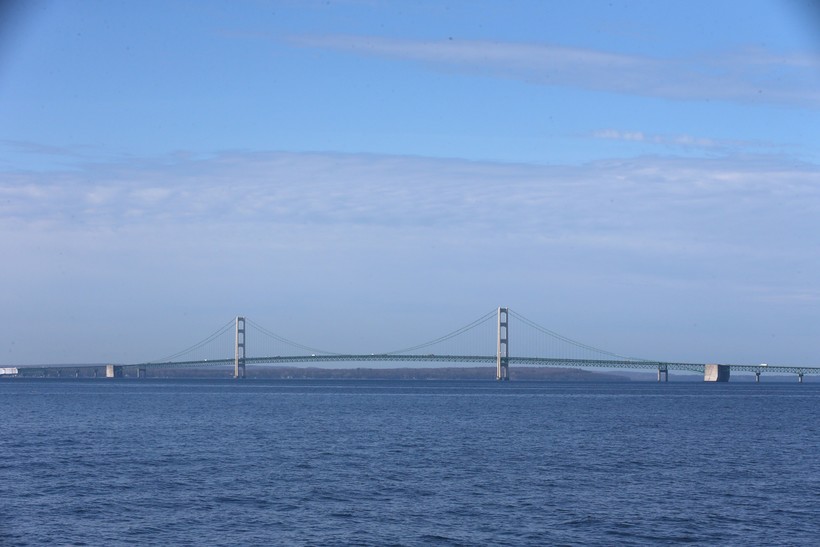 The Mackinac Bridge, a suspension bridge spanning the Straits of Mackinac, connects the Upper and Lower peninsula of Michigan. Carlos Osorio/AP Photo

Before his Democratic successor takes over, Michigan’s outgoing Gov. Rick Snyder is pushing forward a deal with Canadian oil transport company Enbridge for a 4-mile long section of pipe that sits on the floor of the Straits of Mackinac.

That deal could have ramifications for Wisconsin’s waters and residents, said Dan Egan, senior water policy fellow at the University of Milwaukee’s School of Freshwater Sciences and reporter at the Milwaukee Journal Sentinel.

"Wisconsin is not on the sidelines of this issue," he said. "There's been studies done and the currents could carry any kind of an oil spill westward toward Big Bay de Noc, which is really the northern arm of Green Bay."

While Enbridge has put more intensive maintenance into the Line 5 pipeline in recent years — largely due to public pressure after a 2010 spill that cost $1.2 billion to clean up — the potential for another spill is still present, Egan said.

Earlier this year an anchor dented the dual pipelines that transport more than 540,000 barrels of oil and natural gas a day, causing mineral oil to leak into the Strait — Enbridge itself has said the line has a 1 in 60 chance of failing before 2053, with the greatest risk coming from an anchor strike, he said.

"They’re a risk and they'll be a risk as long as they're down there," Egan said. "On the other hand we need oil."

Built in 1953, the pipeline that travels from Superior, Wisconsin to Sarnia, Ontario is seeing pressure from all sides to do something about the aging pipes, solutions have included shutting it down, creating a new one or finding other transportation options.

"Even Enbridge now realizes that they can't keep these pipes lying, they lie exposed on the bottom of the lake bed, and so they've proposed building a tunnel underneath the Straits," Egan said.

Snyder is working to finalize the deal that could cost Enbridge $500 million and take 10 years to construct before incoming Democratic Gov.-elect Gretchen Whitmer takes office and would work to stop the deal.

"They (Enbridge) haven't done the engineering for this yet, and it's going to be quite a feat if they can pull it off because I believe the Straits are over 200 feet deep in places and you're going through bedrock," Egan said.

Alternative transportation methods — such as by train, boat or truck — have serious drawbacks, and transporting more oil through Wisconsin pipelines has seen significant resistance, he said.

"In some ways pipelines are safer," Egan said. "They have fewer accidents, but when they have accidents they can be significantly worse."

And then there’s the question of who should carry the burden, he said.

"A big question that's never been precisely answered is how much of this oil ... stays in the United States," Egan said. "An argument against this pipeline is that these Great Lakes states ... we’re being asked to take the risk for the economic benefit of a Canadian corporation."

While each of the Great Lakes states has its own issues with Enbridge, they’re all connected, he said.

Wisconsin has issues over increasing the capacity of its existing network running the length of the state, Michigan has issues related specifically to Line 5 and Minnesota has issues with Enbridge building a new pipeline that will flow into Superior.

"I don't know if our leaders are looking at the big picture, and the big picture is that there's a lot of oil coming into the Great Lakes Basin and it's got to get through it one way or the other," Egan said.