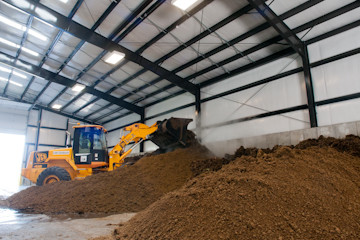 UW Oshkosh is producing energy from food students would otherwise throw away in the cafeteria. The school is now looking for more waste from the wider community. The project is also giving students training in what could become a part of the "green economy."

For the last year, UW Oshkosh has used uneaten food to "feed the beast." UWO spokesperson Alex Hummel says, "Our biodigester is the first of its kind in the Western Hemisphere." As far as the university knows, he says the "beast" is still the only operational one of its kind in the country.

The food waste is taken to a building where it is stored before it is fed into the digester. There it produces enough energy to power more than 200 homes. Energy from the "beast" is either used on campus or sold back to the utility.

Hummel says the goal now is to get more food into the digester. "We're reaching out to restaurants and hospitals and school districts and senior living complexes. Anyplace that really has like a dining services or cafeteria function." The digester also uses grass clippings collected by the city of Oshkosh.

Hummel says the biodigester is a unique opportunity for Environmental Studies majors on campus. "They're running this thing and as they're doing it they are basically innovating what could be a whole new industry in terms of sustainable energy."

As part of their experiments with the biodigester students are working on ways to create truly biodegradable plastic shopping bags.