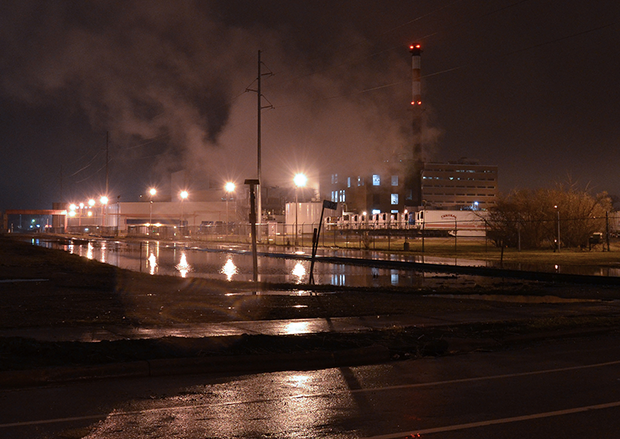 Madison's Oscar Mayer plant, as seen from Commercial Avenue on the city's north side.

Historically, Wisconsinites have perceived their capital city as primarily a university and government town, and perhaps more recently, as an aspiring tech-industry center. They're not wrong — government is by far the biggest employer in the Madison area.

Head a couple miles away from the Capitol though and you’ll find several pockets of industrial businesses surrounded by working-class neighborhoods on the city's east, north and south sides. The soon-to-close Oscar Mayer plant, located along its namesake Packers Avenue on the north side, is the most iconic, but its roughly 700 food-production workers aren't exactly a blue-collar anomaly in the Madison area.

Food processors like Oscar Mayer are part of the manufacturing sector as defined by the federal Bureau of Labor Statistics. In September 2015, the manufacturing sector provided 34,400 jobs, about 8.8 percent of the Madison area's non-farm workforce, according to BLS data. The "Madison area," as defined by the BLS, comprises Dane, Iowa, Green, and Columbia counties. (It makes sense to consider the whole area as opposed to Dane County in isolation: A 2013 state Department of Workforce Development report on commuting patterns found more than 19,000 people travel to work in Dane County from Iowa, Green, and Columbia counties.)

Madison does stand out from the state as a whole. Manufacturing is about twice as big a factor in the entirety of Wisconsin, accounting for more than 16 percent of the state's non-farm workforce. But it's striking how manufacturing in the Madison area and Wisconsin overall have followed very similar trajectories between 2005 and 2015, both in sheer numbers and as percentages of the non-farm workforce. By both measures, manufacturing took a significant hit in the wake of the 2008 stock-market crash. The sector has since recovered a bit, but not to its pre-crash highs. The same can generally be said for another big source of blue-collar jobs, the "construction, mining, and logging" category.

But what's more dramatic in the Madison area is how manufacturing's relationship to other job sectors has changed. After that recession-induced dive, BLS data show manufacturing jobs are increasingly eclipsed by leisure and hospitality jobs (primarily hotel and restaurant workers). That's mostly because of seasonal summer hiring in the hospitality sector, but both the peaks and valleys in that sector are gradually growing. In January 2014, hospitality and leisure jobs hit a seasonal low but, for the first time, don't dip below the number of manufacturing jobs. Instead, the two sectors meet at about 31,600 jobs each.

In 2005, manufacturing jobs were in about the same ballpark as jobs in two other sectors: professional and business services, and education and health services. The BLS includes people working at University of Wisconsin-Madison and the UW Hospital in the education and health services category, not government, so it's worth highlighting that at one time manufacturing was roughly on par with the employers that make Madison, well, a university town. But even before the crash, those other two sectors began to grow, and by 2015 both have a comfortable 10,000-plus jobs over manufacturing.

Just as important, one industry in particular has remained relatively flat for Wisconsin as a whole, but is clearly ascendant in the Madison area. The Madison area's "information" sector, into which the BLS groups software, publishing, broadcasting, and telecommunications businesses, has gone from 9,400 employees in January 2005 to 16,300 in September 2015 — a jump of 73 percent. Much of that is due to the growth of electronic medical records powerhouse Epic Systems in the Madison suburb of Verona. The company employs more than 8,000 people as of 2015. Granted, information is still the Madison area's smallest employment sector, though it now slightly outpaces the construction jobs during the winter construction slump. As noted, the professional/business services and education/health sectors are also showing growth and have more employees overall, but from 2005 to 2015 grew by a smaller percentage, about 32 percent each. And the trajectories of those two sectors in the Madison area roughly follows their performance statewide between 2005 and 2015.

That leaves information as the one sector that’s growing in Madison and not growing very quickly in the state as a whole, which gained fewer than 1,000 of these jobs from 2005 to 2015. The Madison area accounted for 32 percent of the state's information-sector jobs in September 2015, up from 19 percent in January 2005. The Madison area may or may not become the Midwestern information technology hub that some business and civil leaders envision, but the sector is definitely reshaping the Madison area's employment mix.

In Wisconsin as a whole, two sources of blue-collar jobs remain the largest non-farm employment sectors, even during the worst of their post-crash lows. Manufacturing remains second in number of employees overall, behind the trade, transportation, and utilities sector, which includes retail workers, truck drivers, and meter readers. Going back few additional years, manufacturing jobs in Wisconsin saw a significant decline from 2000 to 2010.

The UW-Madison-based Center on Wisconsin Strategy detailed this decrease in a 2010 report, showing that Wisconsin manufacturing jobs plunged from about 600,000 to 430,000 over the century's first decade. But even in surveying this shift and its negative impacts on wages and unemployment, the report found reasons to be optimistic, noting that "(o)nly Indiana has as high a share of its workforce in manufacturing" as Wisconsin.

The Madison area's changing economy doesn't have to be bad news for manufacturing either, said Matthew Kures, a community development specialist with the University of Wisconsin-Extension Center for Community and Economic Development.

"There's probably some synergies to be had there," Kures said. "If you look at some of the technology needs that are coming into manufacturing subsectors, there's certainly some overlap from things like (information technology)."

Even if manufacturers in the Madison area and more broadly across Wisconsin employ fewer people now than at their late-1990s peak, Kures explained, they enjoy some key advantages, especially access to a labor pool with diverse skills and levels of education, plus a geographic location that enables them to reach many U.S. markets at once. "Manufacturing's going to continue to be an important part of our economy," Kures said.

These trends don't diminish the significance of the Oscar Mayer plant to the Madison area. If owner Kraft Heinz can't find a buyer to take it over, 700 production workers and 300 corporate employees would lose their jobs (though the company says most of the corporate staff could possibly relocate). And as The Capital Times recently pointed out, the shift looks a lot more drastic when one focuses on food manufacturing jobs in Dane County. Given these trends, the growth of hospitality and tech, and the continued primacy of government employment in the Madison area, it's difficult to predict what the capital region's workforce will look like in 10 or even five years.