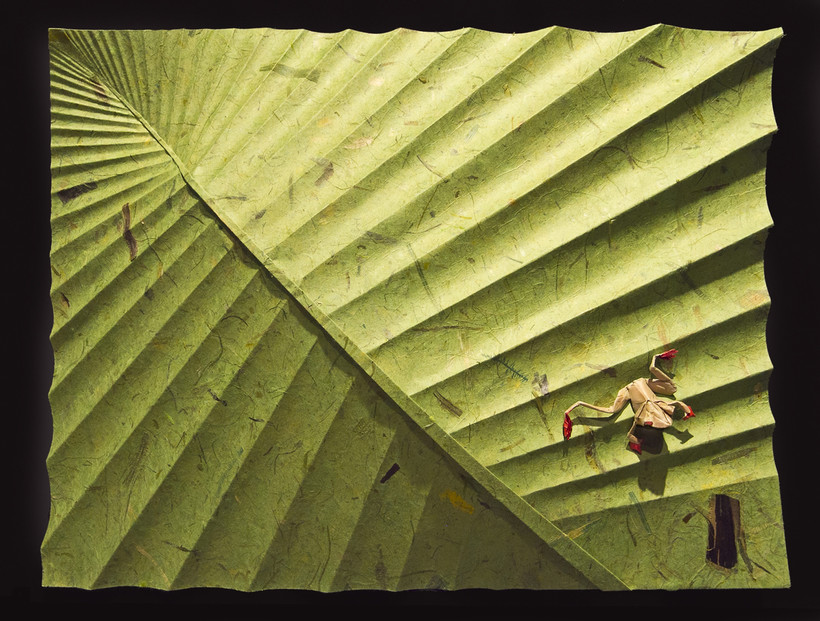 Origami Exhibit Shows High Tech Use of an Ancient Art

An exhibit on origami, or the art of paper folding, opened in Wausau this week. The exhibit highlights how an ancient art is finding uses on the cutting edge of math, design and science.

The origami exhibit at Wausau's Woodson Art Museum contains resplendent evening gowns, botanically accurate flowers, human busts with facial hair, and high tech models of molecular structures and scientific gadgets, each made from a single sheet of paper. The exhibit was introduced by origami artist and Wisconsin Public Radio host Ruthanne Bessman. "The single sheet of paper. It's just amazing, the technical aspect of it and what different folders are doing to the process of folding that piece of paper."

The technical aspect of origami design is shown in airbags, in compact rocket payloads that expand into football size solar energy collectors, and, Bessman says, in stents that are used in heart surgery. "It's collapsed, as its done in surgery to get it into the closed artery. That stent then begins to expand and open up, so that it allows the blood to flow. And that's just an amazing feat."

The exhibit contains two pieces created by artist Christine Edison, who uses origami to teach math at a public high school in Chicago's gritty Austin neighborhood. "Folding in general, you can start seeing that vertical angles indeed are congruent. You can see that supplementary angles do form a straight line. It's easy to see from, like, visual crease patterns."

Edison says students who can't do quadratic equations can be taught geometry and algebra by folding paper. "A lot of our kids who struggle, they are really, really great at spacial skills. They find a satisfaction in it that can be very profound."

The Woodson Art Museum exhibit contains the work of 40 origami artists from 13 countries.