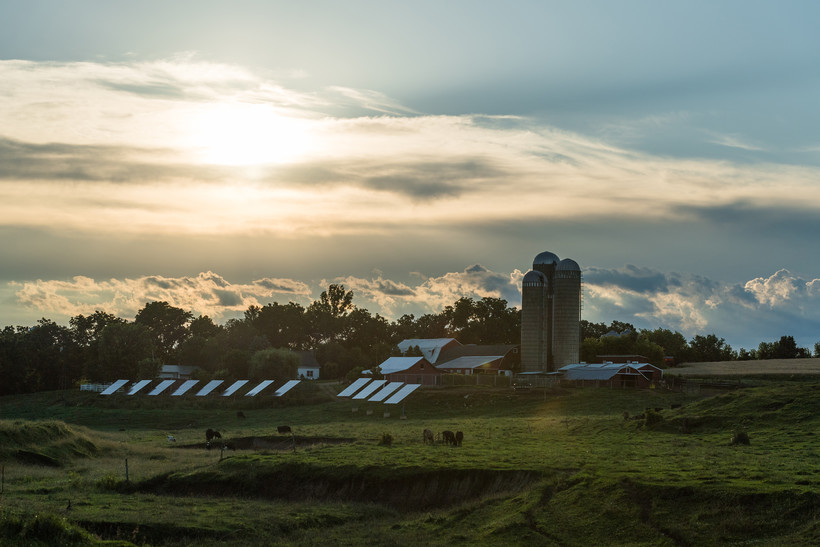 Organic Valley announced their "Powering the Good" loan fund on Monday. Created through a partnership with Clean Energy Credit Union, the $1 million initiative will provide loans at below-market rates to Organic Valley producers for projects like solar electric systems and geothermal heating and cooling.

"Dairy farms need to use a decent amount of energy and solar is a good way to produce it," said Organic Valley CEO Bob Kirchoff. "Then there are things we can do on the farm from efficiency improvements in and of itself. Plate coolers are things that cool the milk and keep it cool until it’s picked up. The lighting in barns, an LED project, insulation for the barn and facilities."

Kirchoff said the program will support farms that already have clean energy projects in mind or offer technical assistance to help producers find the best system.

Organic Valley has been 100 percent powered by renewable energy since 2019 when the brand helped launch three new solar sites in Wisconsin as part of a regional project involving rural communities and the city of Madison.

Kirchoff said there are two major reasons why the cooperative wants to help their farmers invest in their own clean energy projects.

"One, it’s the right thing to do for the environment. But two, it should work for them economically," Kirchoff said. "When our farmers are looking at this, we feel that the interest rate and the term of loan is going to help tip that over, where it just makes all of the sense in the world to do it."

Kirchoff said they already have up to a dozen farms across the national cooperative that are applying for a loan, and he expects Organic Valley to allocate more money to the fund as producer interest grows.

Many farms have had a hard time getting funding for these kind of improvements from traditional ag lenders, Kirchoff said.

"It probably is not easy for (ag lenders) to always fund renewable energy projects. They’re a bit different in scope and scale sometimes. Though the paybacks are clear from a financial basis, the assets itself, I think, are hard to put numbers on at times," Kirchoff said.

Steve Deller, agricultural economist at the University of Wisconsin-Madison, said he agrees that many traditional lenders like banks and credit unions have remained conservative about investing in new projects since the Great Recession.

"It’s almost as though 'Let’s see a number of farms make these investments, see how it plays out.' And if it makes good business sense, good economic sense, then the banks will start to come in," Deller said.

And Deller said most farmers feel the same way about taking on the new technology. He said most renewable energy projects in agriculture are happening on the large, more capital-intensive farms, like concentrated animal feeding operations (CAFOs), and small-scale, environmentally-minded producers.

"(The early adopters) pick it up, they run with it, and then other farmers will sit back and see how does it work," Deller said. "If we see a handful of farmers investing in these medium size solar farms and it's making sense for those farms, you're going to see other farmers saying 'I’m interested in doing that as well.' And that's where you start to see it snowball."

She said a group of farms and rural residents in northwestern Wisconsin recently came together to share the purchase of solar panels and contract an installer at a lower rate.

And she said lenders are starting to see the value of clean energy outside just the return on investment.

"One thing banks are starting to look at, because insurance is starting to look at it is resilience. And they’re looking at risk because we’ve had so many high impact floods and climate events," Gruder said. "They’re starting to realize that there's a value to renewables and I think that’s actually helping to move the market as well."