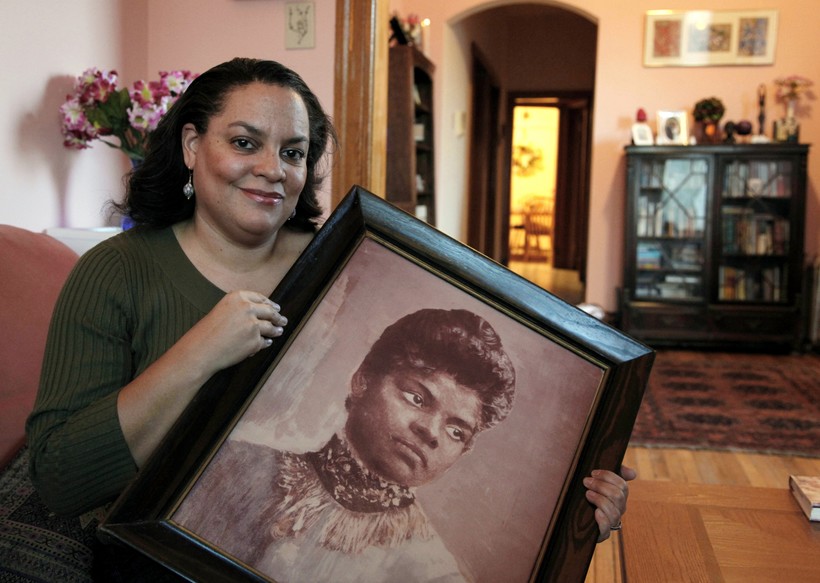 In this Dec. 2, 2011 file photo, Michelle Duster, great-granddaughter of civil rights pioneer Ida B. Wells who led a crusade against lynching during the early 20th century, holds a portrait of Wells in her home in Chicago's South Side. Charles Rex Arbogast/AP Photo

Once 'Overlooked,' Women Get The Spotlight — In Obituaries

Bessie Stringfield broke boundaries in the 1930s, 1940s and 1950s as a black female motorcycle driver, cruising through unpaved roads in rural areas where she wasn’t always welcome.

She was said to have owned 27 Harley-Davidson motorcycles in her life.

Stringfield was inducted into the American Motorcyclist Association Hall of Fame posthumously in 2002. Each year, hundreds of women ride their motorcycles across the country in her name (this year’s ride is set to finish in Milwaukee).

She died in 1993. But it wasn’t until this year that her obituary finally made it into The New York Times as part of "Overlooked," a new history project which spotlights notable women in history by finally giving them their due — their elusive New York Times obituary.

The project was conceptualized by Amisha Padnani, a digital editor for The New York Times obituaries desk.

"Obituaries are really not about death, they’re about life," she said. "And all of the things that people can accomplish in their lifetime, not even for fame, just for their own well being, or for a group of people around them for the betterment of their own lives."

Shortly after she took the job at The Times last year, she says she kept getting notes from readers: why aren’t there more obituaries about women and people of color?

A look through The New York Times archives, beginning with the first issue in 1851, proved the point: since then, only about 15 to 20 percent of obituaries have been about women, Padnani said. Even in the past two years, that number has only been about 21 percent.

As Padnani continued her research, she kept coming across names of women who hadn’t been included. Many were surprising. Author Charlotte Brontë. Poet Sylvia Plath. Journalist Ida B. Wells.

The New York Times started taking reader suggestions for women to spotlight. They got something like 2,500 responses within the first few days, Padnani said.

To pare down the responses, The Times followed the same process they do with all of their obituaries. If the person had made news in their lifetime, then chances are, their death is news, too.

"With some of these women, that should have been the case, like Sylvia Plath," Padnani said. "With others, maybe they should have gotten news for what they did in their lifetime. And so we kind of think of it that way: What sort of marks did they leave in the world?"

With Stringfield, an obituary was a chance to set the record straight. Her legend had grown so big, especially with the rise of the internet, that it was hard to tell what was true about the "Motorcycle Queen of Miami."

New York Times reporter Nikita Stewart, who wrote the obit, says Stringfield was a "woman of mystery." Stringfield was originally from North Carolina, but falsely told people she was born in Jamaica and was left on a Boston street by her father as a young child. Her mistruths didn't just surround her youth, she famously told a Miami Herald columnist in 1981 that she had been married six times to men much younger than she.

"That was her story, and she stuck to it," Stewart said.

"I felt good about that. But then I also wondered, 'Oh my goodness, would Bessie hate me if I revealed her truth?'" Stewart said. "But I think she might’ve gotten a kick out of it."