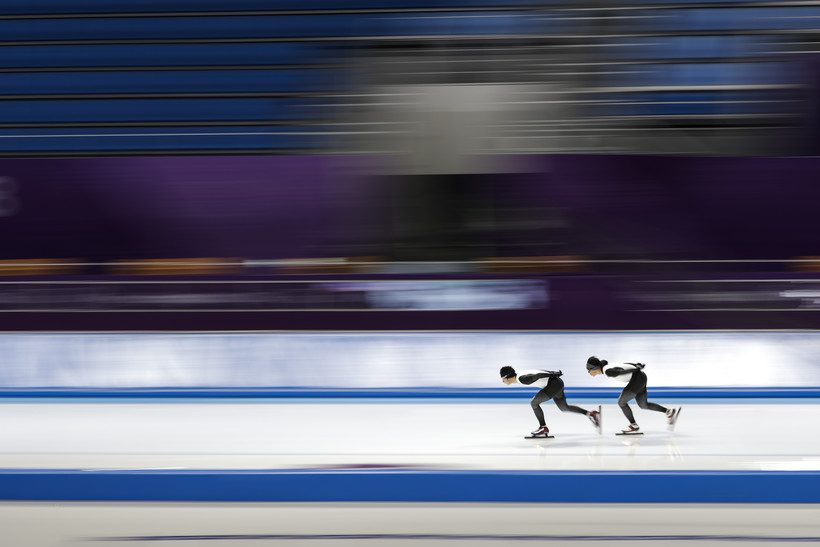 Olympic Speedskaters Gear Up For 2 Weeks Of Competitions In Pyeongchang

Brian Hansen first started speedskating when he was 8 years old. He got his start with a local skating club close to his hometown of Glenview, Illinois.

"I remember being excited, except it was a very new thing at the time and I was really little," Hansen told WPR. He stuck with the sport, and eventually started training at Pettit National Ice Center in Milwaukee. Now Hansen, a 27-year-old Olympic silver medalist in speedskating, is set to make his third appearance at the Olympics.

Hansen along with Mitch Whitmore and Emery Lehman are the three athletes representing Team USA Speedskating at the 2018 Winter Games in Pyeongchang who call the Olympic oval at Pettit their home ice.

Whitmore, a 28-year-old two-time Olympic speedskater, moved to Waukesha when he was 15 years old. Like Hansen, he had his first experience speedskating early on and has not let up since.

"I’ve been training for 19 years," Whitmore said, audibly counting out the time in his head. Long-track speedskating has several variations, but in its most basic form there are two skaters, one in each lane and then, in Whitmore’s words, "essentially just go as fast as you can."

At the Olympic level, there are seven different races for women and men. The majority are time-trial races with distances ranging from 500 to 10,000 meters, where the goal is to get the best time across multiple heats.

Another style of race is called the team pursuit, and it involves two teams of three skaters. Team USA coaches will finalize the group skating in the team pursuit competition before the race Sunday.

Hansen is likely one of the skaters to be tapped for the race. He said the key to the team pursuit is "working together" to "alternate leads so that all three of (the skaters) can get across the line the fastest."

The race starts with both teams on opposite sides of the oval, with men’s competitions skating eight laps and women’s skating six. To win, the whole team must either cross the finish line before the other team’s three skaters, or they must overtake the other team entirely. Lehman, a 21-year-old college junior studying civil engineering at Marquette University, is also favored for the team pursuit competition. Originally from Oak Park, Illinois, he started the week’s competition with the 5,000 meter race.

After qualifying for Team USA at Olympic trials in January, Lehman reflected on what it meant to have that achievement at Pettit.

"It means a lot to have such a big competition at your home ice," he told reporters in January.

Lehman added that making the team was a surprise, and that after learning he would be headed to Pyeongchang, he had to make a few arrangements.

"Yeah, I gotta email my advisers and drop out of classes," Lehman said.

The newest race to the Winter Games this year is the mass start, a competition that’s been called the "NASCAR of speedskating." Hansen is slated to compete in the race Saturday, Feb. 24. The mass start squeezes as many as 24 speedskaters on the start-line who then skate a grueling 16 laps, accruing points with a combination of sprint times and by crossing the finish line first, second and third.

Whitmore, who competed in the 2014 Sochi and 2010 Vancouver Olympic games, is hoping that some of the novelty of the Games will have worn off so he can concentrate on his skating in Pyeongchang.

"I want to take in as much as I can and I think being to two Olympics already I won’t get too distracted by all the show that goes on," he said. "And, you know, I’ll just be able to focus on it being another skating competition."