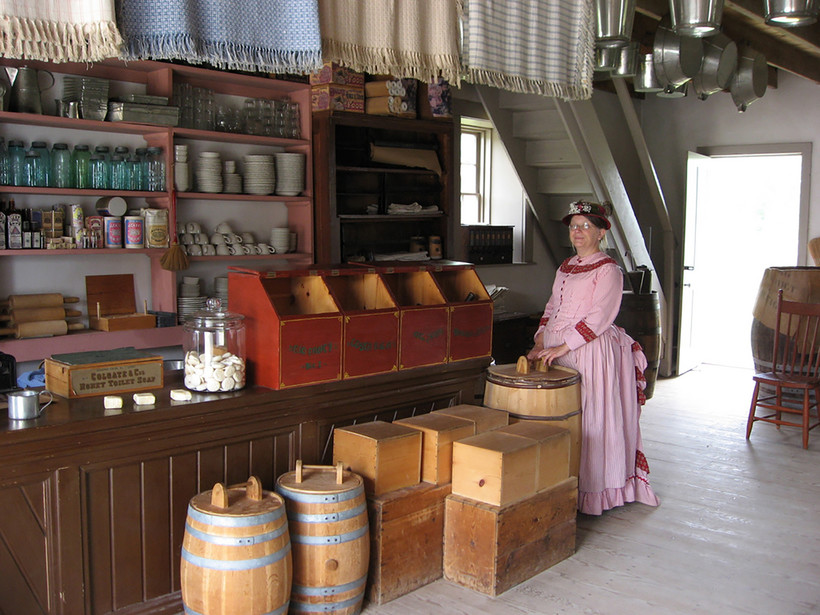 October Is The Last Month To Participate In 'The Wisconsin Journey' Exhibit
By Elizabeth Dohms-Harter
Share:

Thure Kumlien had his heart set on Wisconsin.

A naturalist with a love of birds, the native Swede jumped at the chance to board the brig, Swea, that would set sail for America in the spring of 1843, along with his bride-to-be, Christina. Her sister came along as a chaperone, likely by the request of their parents.

He must have been a decent salesman, said Anna Altschwager, assistant director of guest experience at Old World Wisconsin, because some of the folks he met while aboard the Swea joined him on his journey to Wisconsin, where he homesteaded near Lake Koshkonong.

The histories and identities of Kumlien and those he traveled with are resurrected each day in an Old World Wisconsin exhibit, as participants step into the shoes of Swedish immigrants.

"The Wisconsin Journey" exhibit is a guided experience at the outdoor museum in Eagle, Wisconsin about an hour southeast of Madison. Participants get a biography card and take on the roles of real immigrants from Sweden who came to Wisconsin in the 1840s. Participants are part of a group of no more than 14 people, Altschwager said. The 90-minute experience features stops at three locations where guests hear stories about the immigrants' lives.

"You get to work as a community to explore and face the challenges that they may have faced," Altschwager said of the exhibit that runs through October. Afterward, the guests meet for a conversation where they often reflect on their own immigration stories and their identities.

Altschwager said the experiences help participants connect to immigrants, despite the nearly 200 years of separation between them.

"The past isn't over," she said. "Those are the stories that make us who we are."

She pitched the experience as a way of linking America's identity as melting pot of culture and heritage with how it was defined by the immigrants who chose to call it home.

Altschwager said the Swedish immigrants were chosen because they represented a heritage that had been absent from the 60 buildings on Old World Wisconsin's 600-acre campus that was created in the 1970s, including a Norwegian settler's cabin from the 1840s, a Finnish log home from 1910 and a Welsh general store from the 1880s.

"We wanted to find a story that we weren't representing with architecture, with the built environment, and the Swedish story was one of those," Altschwager said.

Altschwager said an intern at the museum was able to find a journal in historical collections that was written by Kumlien. Through that journal, staff were able to identify members of the larger community of which he was a part. Those sources were used with tax records and census data to help revive this Swedish community.

"It's through all these primary sources that this community came to life," she said.

While "The Wisconsin Experience" takes place three times each day during the week, the entire museum is open to the public for tours this weekend, on Oct. 13 and Oct. 14, for Fall Fun on the Farms. Complementary trams take visitors throughout the museum for those who would prefer not to walk.

While there, guests might run into experienced, costumed facilitators, some of whom are working in the kitchens and barns.

"Be forewarned that if you walk into the kitchen, we're going to ask you to help us," Altschwager jested.