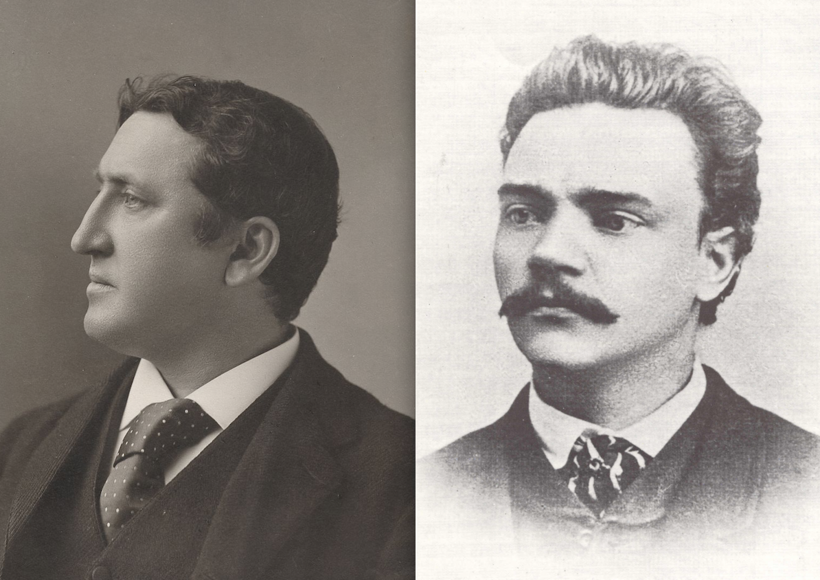 Bringing the great composer Antonin Dvorak to New York in the 1890s was one thing. Keeping him entertained once he was there was something else again as critic James Huneker found out.

Mrs. Jeanette Thurber, the wife of a prominent New York greengrocer, brought Dvorak to America to direct her newly founded National Conservatory of Music.  For after-hours amusements she turned Dvorak over to Huneker, who invited Dvorak to experience the American drink called the whiskey cocktail.  Huneker observed that in reply Dvorak "nodded his head, that of an angry-looking bulldog with a beard. He scared me with his fierce Slavonic eyes," Hueker added, "but he was as mild-mannered a man as ever scuttled a pupil's counterpoint." Among themselves, the Amerkcans referred to the composer as “Old Borax.”

Huneker thought that the hard American liquor might agitate Dvorak's nerves, but the two set out on a tour of the "huge circle through the great thirst belt of central New York.” Not being a heavy drinker, Huneker ordered a beer every time Dvorak had a cocktail. They spoke in German, Huneker taking comfort in finding a man whose accent and grammar were worse than his own.

As Dvorak was drinking his nineteenth cocktail, Huneker suggested that it might be time to get something to eat. Dvorak suggested instead that they go to the East Houston Street Bohemian Café and drink something called a Slivovich. "It warms you after much beer,' he said.

Huneker begged off and never did get around to joining Dvorak at the cafe. "Such a man is as dangerous to a moderate drinker as a false beacon is to a shipwrecked sailor," he said later. "And he could drink as much in spirits as I could in the amber brew." Huneker told Mrs. Thurber that he was through piloting the composer around. The next time he encountered Old Borax at a Bohemian resort on the East Side, the American carefully avoided him.  We’ll hear about another of Dvorak’s American adventures next time...

Evers Administration Says Statewide Mask Mandate Can Be Enforced Despite Sheriffs' Opposition
'I Could Easily End Up On A Ventilator': Epic Systems Employees Decry Company Policy Amid Pandemic
Waukesha County One Of The Latest Wisconsin Suburbs To Be Hit Hard With COVID-19
Wisconsin Colleges Push Ahead With Reopening Plans As COVID-19 Cases Surge
COVID-19 Activity High In All But 6 Counties