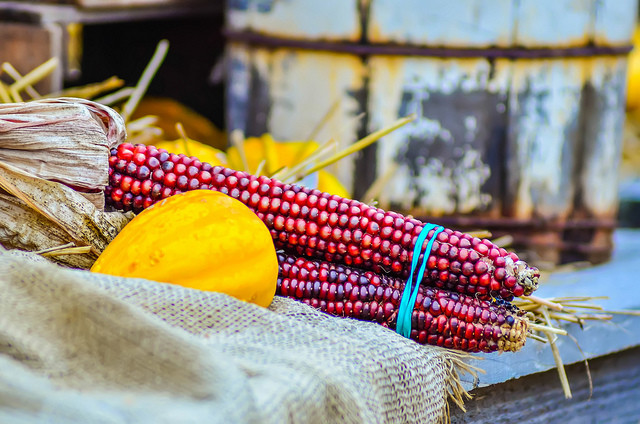 While historical details about the first Thanksgiving are limited, the popular modern-day narrative is more romantic than reality, and those misconceptions continue to affect native people today. So says Gary Johnson, a member of the Lac Courte Oreilles Band of Lake Superior Ojibwe and a professor emeritus at the University of Wisconsin-Superior where he directed the First Nations Center.

"What most people think of is the pilgrims giving thanks for having survived through the winter," he said. "And most people think that they invited the Indians in because they helped them to survive ... but that's not quite what was happening there."

While that meal in 1621 has come to symbolize a peaceful coexistence between the pilgrims and native people, the actual relationship between the groups was far more complicated, Johnson said.

"At best they were maybe tolerant allies ... and the idea that they invited the Indians wasn't really true either," he said.

The pilgrims were on a celebratory hunt at the end of the harvest when the Wampanoag heard their gunshots. After realizing the gunshots were for a celebration, they joined the pilgrims.

And the meal itself was far from what is considered a traditional Thanksgiving meal today, Johnson said. Venison, corn and shellfish were included in the feast. It’s possible turkey was too, but duck or geese would have been more likely.

In the years following, the relationship between the native people and the pilgrims deteriorated rapidly, he said.

"They didn't look at each other as equals, especially the pilgrims and the Puritans that followed after them," Johnson said. "They looked down upon the native people and thought it was their mission to Christianize them."

"And so there was this war-like atmosphere between the two. And pretty soon they realized they just weren't going to get along," he said.

But whether it's the narrative of the friendly Indian or the warrior, only part of the story is told, Johnson said, which continues to perpetuate myths and stereotypes about Native Americans.

"Too many times if we don't look like that myth, we don't get recognized," he said. "And then when we stand up for things that are important to us, people don't want to hear it, they want the myth."

"(We) practice Thanksgiving ... we have Thanksgivings throughout the whole year, the harvest is only part of it," he said. "When our children get their first deer we have a feast for that to give thanks to show that we recognize this."

The First Nation Program has been fighting those myths and stereotypes perpetuated in textbooks and through Thanksgiving and Columbus Day for decades, Johnson said. But individuals also need to educate themselves.

"Get to know some native people," he said. "There's things happening all the time, there's concerts, there's lectures ... but you're going to have to probably take the incentive out there and that's tough ... for some people because it gets you out of your comfort zone."