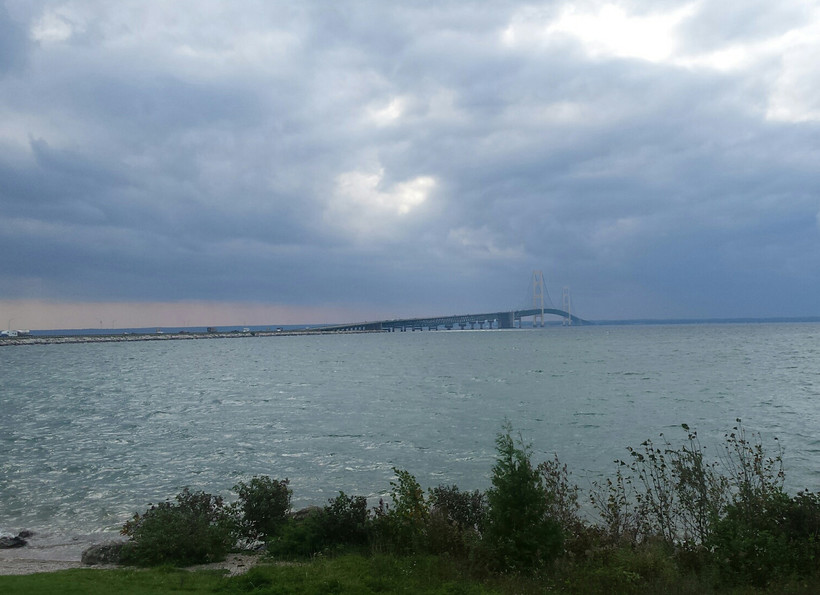 Enbridge's Line 5 pipeline is on the bed of Lake Michigan, just west (right) of the Mackinac Bridge.

A federal court in Detroit will hear arguments this week in a lawsuit against the U.S. government over a controversial, aging oil pipeline that passes under Lake Michigan.

The so-called Line 5 pipeline is operated by the Enbridge Energy, which also does a lot of business in Wisconsin. In fact, the roughly 60-year-old line starts in Superior before running across Michigan's Upper Peninsula on down into the lower part of the state.

It's that section of Line 5 spanning the Straits of Mackinac between Lake Michigan and Lake Huron that is the center of scrutiny and of the suit being brought by the National Wildlife Federation.

It's a beautiful area, but the natural conditions are treacherous where the two-pipe stretch of Line 5 carries crude oil across miles of lakebed.

"The Straits are really dynamic – the dynamic current flow; the weather changes daily, even hourly around here," said Matt Goddard of the Michigan Department of Environmental Quality.

Environmental groups worry the age of the lakebed structure in all those swirling currents has made the pipeline increasingly at risk of a major oil leak that could quickly spread.

Jennifer McKay, policy director for the Tip of the Mitt Watershed Council, said a spill would not only be harmful to wildlife and to people who get their drinking water from the lakes, but also to the region's economy.

"Our entire industry is based on our water," McKay said. "It's tourism, recreational-based industry, hunting, fishing, tribal subsistence. So, it would be a significant devastation to have a spill in the Straits of Mackinac."

Thursday in Detroit, the NWF will argue in court that federal regulators charged with pipeline safety approved a spill response plan from Enbridge in 2013 without fully assessing potential impacts of a spill on wildlife and the lake shore. That approval was given just six months after the same agency rejected an earlier proposal for failing to comply with the Clean Water Act. The NWF claims the pipeline is operating illegally. Enbridge has a history of relatively minor spills in Wisconsin and a major one from another line a few years ago near Marshall, Michigan.

But on the south side of the straits, the company is trying to show Line 5 is safe.

At Enbridge's recently upgraded pumping station west of Mackinaw City, employee Joe Calcaterra told a group of reporters from the Institute for Journalism and Natural Resources about the company's PIG, or pipeline inspection gadget, which they periodically send through the lakebed pipes.

The PIG, that Enbridge likens to a mini-MRI machine, tests for dents, cracks and corrosion. It's part of a safety plan that has also included installing metal support anchors under parts of Line 5 to get the pipe off the floor of the lake, according to the company.

On the same visit, Enbridge spokesman Jason Manshum stood inside a garage at the station and pointed to vehicles and other equipment he said would be used to quickly respond to any spill.

"You're going to see, over time, an additional boom here," Manshum said. "We've got our own boat. We've got this truck, this vacuum-truck. We've got all of this set-up, so that if there's a response, we can respond swiftly and immediately."

Manshum said Enbridge has no plans to stop using Line 5. The company installed four pipeline anchors this fall, and wants to put in 18 more next spring. But the state of Michigan has launched two studies that could affect the long-term future of the pipeline.

One study is a risk-analysis. The other is a summary of potential alternatives, such as closing Line 5 and moving more crude oil by rail or using the company's other pipelines. The reports are due next year.