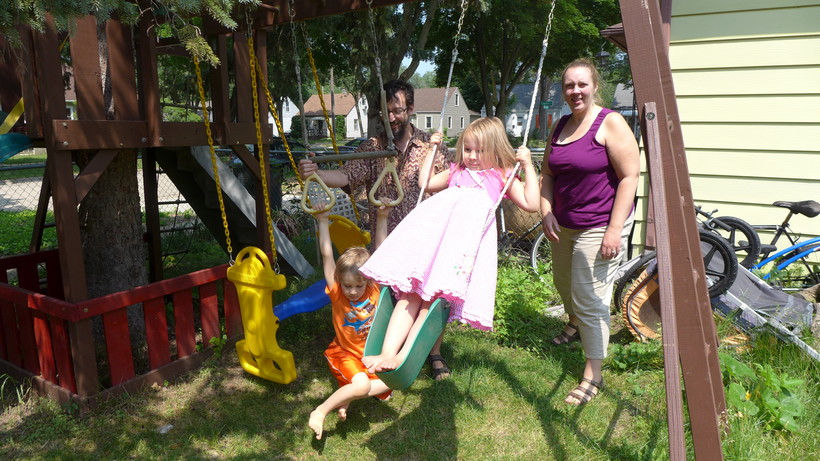 Rob and Deverie Tinnen play with their 4-year-old daughter Kiran and 6-year-old son Ronan in the backyard of their Madison home. | Photo: Shamane Mills/WPR

Officials, Parents Evaluate Vaccine Exemptions As Some Diseases Are Resurgent

More than 20 states allow parents to forego their child's school vaccinations for personal reasons. In Wisconsin, the number of children not getting shots under this exemption has grown steadily, but this comes at a time when the country is seeing resurgence of a disease once thought eliminated: measles.

Health officials trying to ease concerns about childhood vaccines say that parents who have reservations should instead fear the diseases that the vaccines prevent.

"You know, if you talk to our parents and grandparents, the fear of polio or the fear of measles was palpable," said James Conway, a professor of pediatrics at the University of Wisconsin School of Medicine.

In Wisconsin this year, there have been college campus outbreaks of mumps, a couple cases of measles and in 2012, a wave of whooping cough. Despite those incidents, an increasing number of parents in Wisconsin are choosing not to vaccinate their children. Over the last four years, personal conviction waivers have increased steadily and are now at 4.3 percent. Far fewer get exemptions for religious or medical reasons.

This development has left some state health officials concerned.

"We've certainly had situations where we've had individuals with personal conviction waivers who've come down with (a) vaccine-preventable disease," said Dan Hopfensperger, director of the Wisconsin Immunization Program.

No sustained outbreaks have resulted because of that, but some, like Conway, think the personal conviction waiver is slowly chipping away at a target immunization rate of 90 percent, which is already diminished by other factors: Some people don't have access to vaccines or can't afford them while others can't get them for medical reasons.

"You're really starting out behind the 8-ball," Conway said. "The best you do then is 95 percent, and that's something that makes all of us in public health and those of us who care for individual patients very nervous."

Conway and others refer to this trend as vaccine "hesitancy." Some national editorials refer to a vaccine "crisis." Comedy Central's late-night comedy show "The Daily Show with John Stewart" has skewered what it calls "an outbreak of liberal idiocy."

A common complaint of concerned parents is that there are too many shots too soon -- a notion popularized in a book by Dr. Robert Sears. There aren't studies showing delaying certain shots is safer. In fact, critics say it could just leave children vulnerable and create more doctor's visits.

The number of shots is only one concern for parents like Deverie and Rob Tinnen. The Madison chiropractors also are wary of what's in vaccines.

"There are things in there we don't know how they are going to affect kids as they grow. It's too uncertain," Deverie Tinnen said.

The couple has a 6-year-old son and a 4-year-old daughter. They said they're concerned about substances like aluminum that are put in vaccines to boost immune response.  Researchers say most aluminum in the body is quickly eliminated and that infants get more of the metal through breast milk or formula than vaccines.

Studies disproving a link between vaccines and autism have made that less of concern for the Tinnens'. For now, they're convinced a healthy diet and lifestyle will ward off disease.

"Eating garbage, junk food will lower your immune system and you are more likely to be susceptible," said Deverie Tinnen.

Doctors and other health officials routinely promote eating well, but Hopfensberger said that only goes so far.

This spring, measles cases in the U.S. were the highest they've been in two decades -- for a disease that was once considered eliminated. Officials blame the outbreak on low vaccination rates for diseases they said can be just a plane ride away.