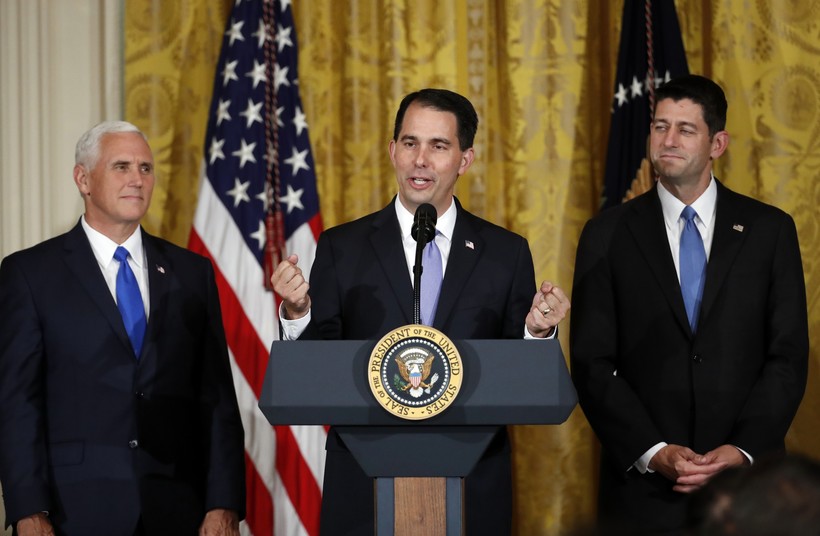 Wisconsin Gov. Scott Walker, center, accompanied by Vice President Mike Pence, left, and House Speaker Paul Ryan of Wisconsin, speaks in the East Room of the White House, Wednesday, July 26, 2017, in Washington. Trump announced the first United States assembly plant for electronics giant Foxconn in a project that's expected to result in billions of dollars in investment in the state and create thousands of jobs.

Walker: Foxconn Won't Receive $3B Unless It Hires 13K Employees
By The Associated Press and WPR Staff
Share:

Gov. Scott Walker and Foxconn CEO Terry Gou watched the white wings of Milwaukee's art museum open over them to mark their agreement to have the electronics manufacturer build its first United States plant in Wisconsin.

Walker and Gou noted the symbolism of the wings has special significance because the project to bring Foxconn to Wisconsin was called "Flying Eagle." The art museum building is a white, winged-shaped structure designed by Santiago Calatrava that sits on Lake Michigan.

The deal was made official Thursday with the signing of a memorandum of understanding that calls for Foxconn to invest $10 billion in Wisconsin and eventually create 13,000 jobs in exchange for $3 billion in tax credits. Walker said the project says to the world, "We have arrived, the eagle has landed."

The announcement of Foxconn's arrival in the United States came Wednesday in the East Room of the White House, one day before business leaders and officials welcomed Foxconn to Milwaukee at a gathering at the Milwaukee Art Museum.

The deal with Foxconn will make Wisconsin the first manufacturer in the country to build LCD screens.

"The screens are used, as you saw, in health care, certainly in entertainment, in the automotive industry and in the aviation industry," Walker said at the museum. "Right now, all those LCD displays are made in Asia. No longer will that be the case. With this deal they will be made in America, here in the proud state of Wisconsin."

Foxconn is evaluating multiple sites in southeast Wisconsin. But the planned facility that would manufacture LCD screens would be operational by 2020 and cover 20 million square feet, large enough to hold 11 football fields. The entire campus is envisioned to cover nearly 1.6 square miles.

Walker said the construction of the plant would require 10,000 construction workers and building the facility could lead to 22,000 direct and indirect jobs.

Gou said he chose Wisconsin as the home of the first display panel manufacturing site because of Walker and his leadership team.

Gou spoke Thursday in Milwaukee at the ceremony and praised Walker for traveling to see him on a weekend, joking that no one works on weekends. He also said he picked Wisconsin because it is in the heart of the United States.

Walker has been touting the deal as a once-a-generation opportunity that will transform Wisconsin's economy, and now that Wisconsin has landed the coveted Foxconn plant it will need to quickly transition to a more highly skilled workforce than the assembly lines that established the state's manufacturing legacy.

Walker said the new plant should serve as an attractive destination for workers.

"Some might say on first glance, what is this going to do to challenge our quest for talent?" he said. "Well, I have to tell ya, when you have something this big, this transformational, it will help draw more talent, because talent will come to this corridor from across the country and around the world."

The electronics giant known for making Apple products in China has not said what type of jobs it will offer in order to produce liquid-crystal display panels that are used in televisions and computer screens. But some of the higher-end positions could be for engineers and software developers and those jobs aren't always easy to fill.

Before the signing, Walker said critics of the state's proposed $3 billion deal to land Foxconn should rest easy.

Walker said in an interview Thursday on WTMJ-AM that Taiwan-based Foxconn will only get the money if it fulfills its promise to build the plant and hire up to 13,000 workers.

Walker said the incentives will go down proportionately if Foxconn spends or hires less than promised.

Some Democratic critics have questioned the cost of the incentives and pointed to Foxconn's history of making big promises on investment only to not follow through.

The Wisconsin Legislature must approve the deal in a special session expected in August.

Related Links:
How Deals Like Foxconn Get Made
Foxconn To Build $10B Electronics Plant In Wisconsin