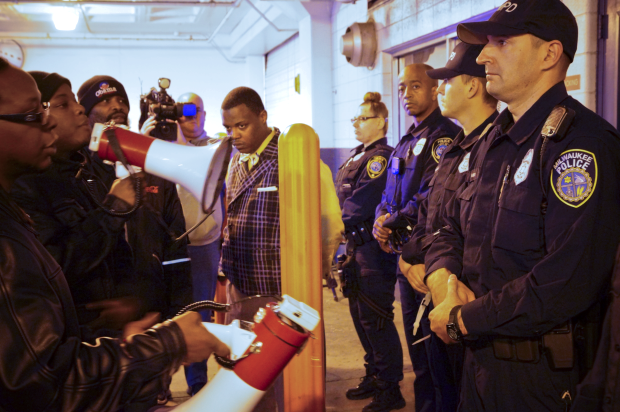 Supporters of Dontre Hamilton and Milwaukee Police officers during a protest in 2014.

A white police officer who was fired after fatally shooting of a black man in Milwaukee last year goes before a city panel Thursday afternoon, asking for his job back.

Milwaukee's Fire and Police Commission is scheduled to hear an appeal on whether former officer Christopher Manney violated police department rules prior to Manney shooting Dontre Hamilton at a downtown park.

The Commission would then determine if Police Chief Ed Flynn's firing of Manney was appropriate. Dontre Hamilton's brother, Nathaniel, said in a new online video that Manney should not get his job back.

"We want him to understand that shooting someone 14 times is murder," Hamilton said.

Milwaukee prosecutors have already ruled that Manney should not face criminal charges for killing Dontre Hamilton. Manney's attorney said Chief Flynn's stated reasons for firing Manney are an unprecedented use of Department rules.