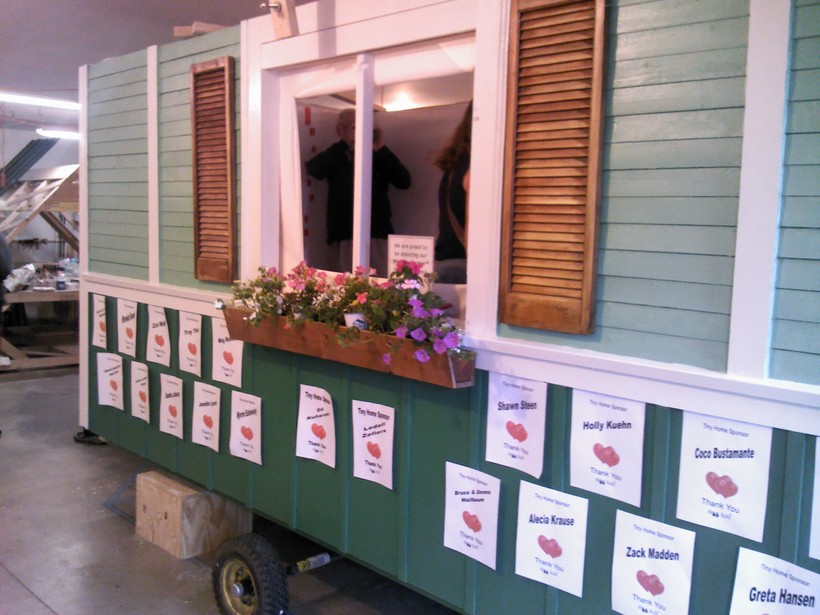 A homeless prevention group in Madison has begun building tiny houses on wheels that they hope will eventually become part of a homeless village.

The Occupy Madison Tiny House Project is modeled on a similar effort in Portland, Ore. There, organizers were able to lease of piece of land and build several one-room homes to form a village. Members of Occupy Madison hope to do the same.

This week, the first tiny house in Madison rolls off the assembly line at a garage workshop on the city's east side. Bruce Walbaum, one of many who helped build it, says it measures about 100 square feet made mostly of old warehouse pallet boards. He says ideally, the home will include an electric outlet so the residents can plug in a small refrigerator, a microwave, and a toaster oven.

"We've have also partnered with the University of Wisconsin School of Engineering," says Walbaum. "They're providing a small photovoltaic solar electric system that will allow for minimal lighting. There's also a composting toilet inside and that requires a small amount of voltage for venting."

The tiny house is built on wheels because under a city ordinance it must be moved every 48 hours. Construction supervisor says he hopes that's only a temporary situation.

Several Madison churches have expressed interest in allowing some of the homes to be placed in their parking lots. Four homeless people have already signed up for two of the homes and have each already put in more than 200 hours of sweat labor in helping build them.