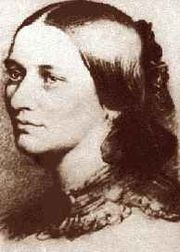 Clara Schumann was one of Europe’s great pianists. The widow of Robert Schumann was also the closest friend of Johannes Brahms, and she wrote to him from Vienna on January 24, 1866:

The financial situation here seems to be pretty bad and yet all of the concerts are well attended. I hope mine will be too! My first one is on Saturday the 27th, the second on February 1st. I would be most grateful if you’d send me your Horn Trio, which I want to play on February 4th at Hellmesberger’s. He seemed to pounce on it right away and mentioned a phenomenal hornist....

Imagine! I’ve had another stroke of bad luck because in Brusnwick the other day I took a tumble so bad that I could have broken every bone in my body, and it was at a concert, too, in front of an entire audience. Four temporary steps had been set against the stage because the stage and the steps weren’t finished yet, and the steps weren’t attached to the stage, just put there to look good.

When I had finished playing and wanted to listen to the Symphony a gentleman led me toward the aforementioned steps, but as soon as I put my foot on them the whole business collapsed with me on top. I was mortified and it was quite a while before I could get up because I had really hurt my foot. In fact I’m still feeling the effects of it and cannot walk but have to drive everywhere.

In the meantime, the sun is doing its utmost to tempt me to go out and I’m feeling rotten for lack of exercise. And yet I don’t want to complain about it at all because it really was a miracle that things weren’t worse.