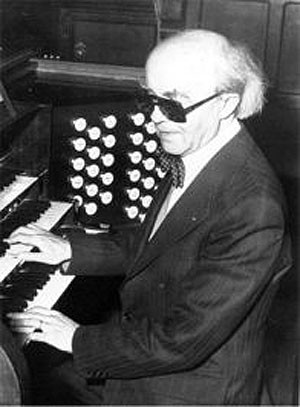 During the German occupation of Paris, French musicians had to make a choice: perform for the enemy or risk all by remaining loyal to the Resistance and refusing. Among those who dared to refuse was organist and composer Jean Langlais.

Langlais thought it was particularly gratifying that the liberation of Paris by Allied troops came on August 25 since that was the feast day of St. Louis, the patron saint of the city. But liberation on that day in 1944 was dangerous. The city was still infested with rooftop snipers as the Germans retreated. Langlais described a performance that could have become deadly for all in attendance.

Hearing of the German retreat from the city, Charles de Gaulle, leader of the Free French, said that there would be a Te Deum performed at Notre-Dame Cathedral. Langlais and two friends walked over and arrived early to find the cathedral strangely quiet. The bells weren’t ringing.

As de Gaulle approached the cathedral, he was fired upon, and so were Langlais and his friends, who ran inside and threw themselves onto the floor. Those who had come to sing remained silent  until the organist was authorized to play.

The organist began a Magnificat. The only singer to respond was de Gaulle, who was answered eventually by the rest of the attendees, still lying on the floor, singing “et exultavit spiritus meus”—and my spirit shall rejoice.

As the gunfire continued outside, the singers got through the entire Magnificat.

When de Gaulle left the cathedral, he was fired at again, and so were Langlais and his friends, as many wounded or dead were brought out on stretchers. On their way home, Langlais and his friends threaded their way home through a gauntlet of shooting. When they reached a store, the firing stopped abruptly, suggesting to Langlais that the Resistance had killed all of the rooftop shooters.

But he couldn’t be sure because, from the age of two, he had been blind.