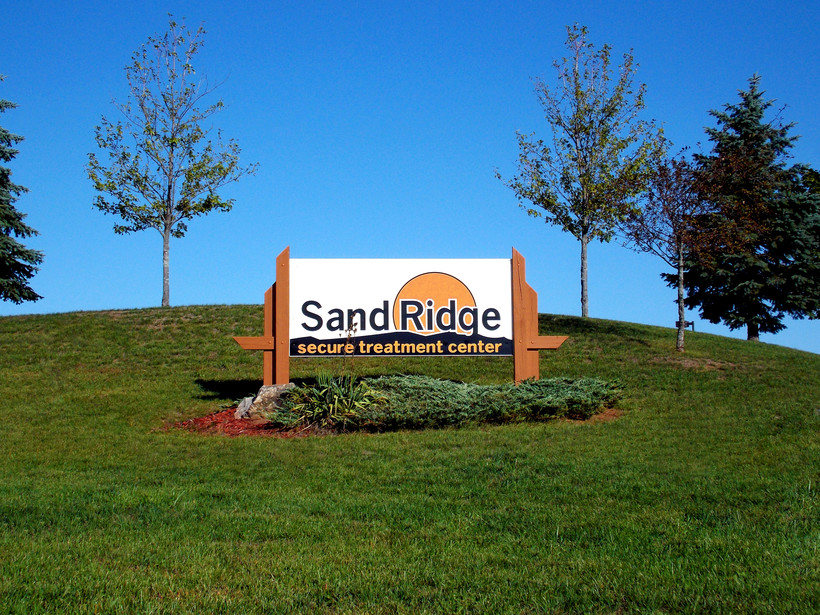 The Sand Ridge Secure Treatment Center treats sex offenders that have been deemed more likely than not to commit a new crime. Photo courtesy of the Wisconsin DHS.

Rate Of Release Has Almost Quadrupled Over Past 5 Years
By Gilman Halsted
Share:

Over the past five years, there has been a dramatic increase in the number of sex offenders released from the state's Sand Ridge Secure Treatment Center in Mauston. Wisconsin Public Radio teamed up with the Wisconsin Center for Investigative Journalism (WCIJ) to find out why. This report is the first in a three-part series (part 2, part 3) that examines what life is like for the inmates behind the razor wire fences at Sand Ridge, and how the patients there prepare for re-integration into the community.

Editor’s Note: In compliance with a request by Sand Ridge, only the first names of patients were used for this story.

Wisconsin is one of 21 states with a law that allows a court to civilly commit a small class of repeat sex offenders to an indefinite period of confinement and treatment after they have already served a prison sentence. Since the law was passed 20 years ago, the state has committed about 500 such offenders, known as “sex predators” or “sexually violent persons.”

Two-thirds of them are still locked up at Sand Ridge Secure Treatment Center in Mauston.

“We are treating a very small percentage of sex offenders in Wisconsin, and that small percentage are the highest or most likely to re-offend in their lifetime,” said Deborah McCulloch, the director of Sand Ridge.

For an offender to wind up at Sand Ridge, they have to be diagnosed with a mental disorder and a criminal history that makes it more likely than not that they will commit a new crime. Once an offender is committed to Sand Ridge, psychologists evaluate his progress in treatment each year and use historical data on recidivism to determine his risk level.

Over the past five years, 114 offenders have been released, compared to only 31 in the previous five-year period. Staff at the center say the increase is partly due to the effectiveness of the treatment program. Lloyd Sinclair, who is in charge of community programs at Sand Ridge, says only five of the 67 patients released between 1994 and 2010 have committed new sex crimes.

“If we can have the kind of re-offense rates that we have with patients who have been out four or five years, we feel some sense of confidence,” said Sinclair. “Particularly (given) how high-risk our patients are, the evidence is, of those who have been realeased, that the treatment program has been beneficial.”

The increased releases are also driven by new data that show how often released sex offenders commit new crimes – a rate that has gone down nationally. Now, the current patients at Sand Ridge are considered less likely to re-offend.

Under a new state law signed in December, most offenders released from Sand Ridge will be under strict supervision.

Larry was released this month after serving 19 years for sexual assault, more than ten of them served at Sand Ridge after completing his original prison sentence. He currently lives in Rock County and still goes to weekly therapy sessions, but he can't walk the streets of his neighborhood without an escort.

“I can go out, have certain people come and pick me up,” said Larry. “I can go grocery shopping, clothing shopping – those sorts of things. But inside my home I do a lot of studying, especially religious studying. I do a lot of exercising. Just little things to keep myself busy. There's not much that I can do as of right now (about) getting out because of the way the law is written.”

Even with the restrictions, Larry said there are some upsides to being on supervised release.

“I didn't want to live on the street or under a viaduct or something like that,” said Larry. I have a support team that is willing to help me get back on my feet.”

Sometime in early February, Larry will get a chance to visit with his family for the first time since his release.

You can see the full report on Sand Ridge at the WCIJ website and in newspapers around the state.