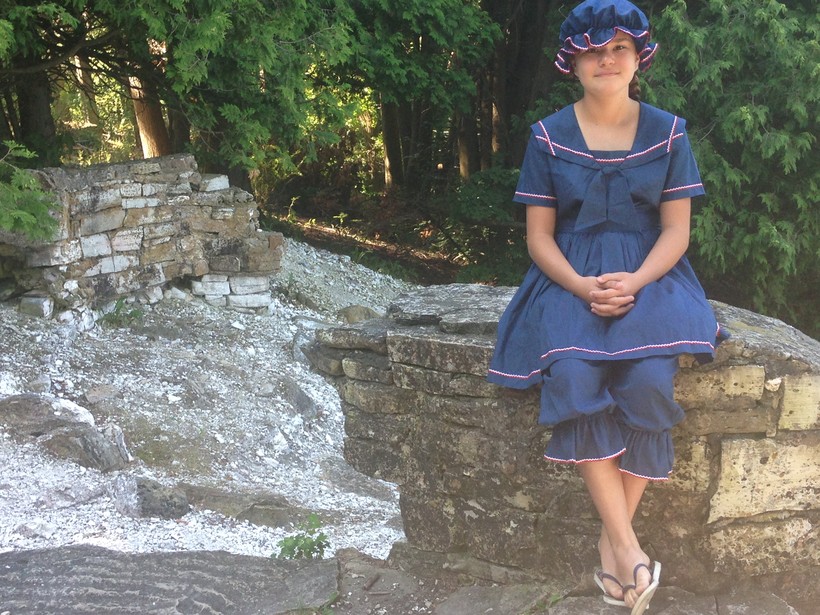 During the 100th anniversary celebration of the founding of Camp Meenahga in 2016, volunteer Nina W. poses in a replica swimming suit from the 1920s. She sits on the remains of Camp Meenahga's Lookout, a gazebo structure located on Shore Road in Peninsula State Park. Photo courtesy of the Wisconsin Department of Natural Resources/Peninsula State Park Archives by Kathleen Harris

Nostalgic For Summer Camp? Relive It Through The History Of Camp Meenahga

Author Chronicles Camp For Girls In Door County That Operated From 1916 To 1948
By Elizabeth Dohms-Harter
Share:

As COVID-19 takes its toll on summer plans, Kathleen Harris has one idea for those nostalgic for the summer camp experience — reading about it.

Harris' recent book dives into the history of Camp Meenahga, a girls camp that ran from 1916 to 1948 in Door County's Peninsula State Park. "From the Lookout: Memories of Peninsula State Park's Summer Camp For Girls," reflects on experiences girls and young women had at the camp, shaped by two world wars and the Great Depression.

The book, published by the Wisconsin Historical Society Press, pieces those experiences together using decades of camp rosters, letters home, yearbooks and other primary documents from about 25 Meenahga campers and Door County residents.

Harris, who worked at Peninsula State Park as a naturalist, writes about butter shortages during World War II, which forced kitchen staff to use margarine. The spread had to be dyed orange: State law dictated that margarine could not be yellow, to distinguish it from butter.

She also highlights songs, poems and essays preserved in the camp yearbook, Pack and Paddle, that allude to pivotal figures and events of the era, from Sigmund Freud to the atomic bomb.

There were about 1,300 young women ages 12 to 20 who attended the camp across its 33-year span. Despite the camp having no electricity or running water, its campers were largely wealthy, precluding poorer Door County residents who lived nearby from attending. 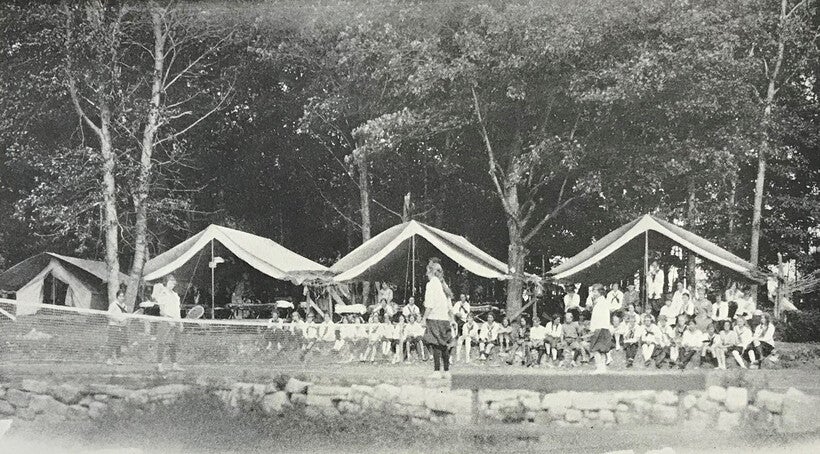 Camp Meenahga's 1928 brochure included an image of a row of canvas tents where the girls and young women slept. Photo courtesy of the Wisconsin Department of Natural Resources/Peninsula State Park Archives

Among those who camped there were Nancy and Mary Kimberly, family members of Kimberly-Clark Corp. owners, and Katherine and Janet Turnbull, daughters of the first president of the Green Bay Packers.

The camp was started by two single mothers from St. Louis, and "arose out of necessity," Harris said.

The women, Frances Louise "Kidy" Mabley and Alice Orr Clark, were struggling financially, and saw the camp as a money-making opportunity. The two knew each other because their children attended school together, began talking and realized they both had similar ideas for a camp for girls. 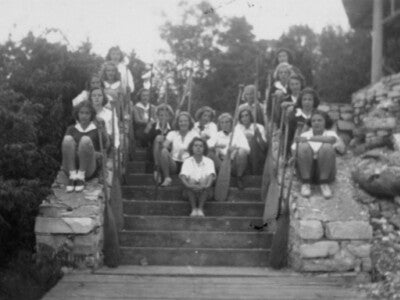 Campers are arranged in the letter M near the Lookout of Camp Meenahga in Peninsula State Park, circa 1940. Photo courtesy of Grace Lanier Brewer

Their decision to open the park came as youth camps were opening across the United States, as were state parks. The state Legislature had just designated Peninsula a state park seven years prior to the camp's settlement.

Clark and Mabley, the camp's leaders, assured parents the girls would only participate in one strenuous activity each day — a relic of widespread belief that physical activity would make women infertile.

But that thinking evolved and eventually the young ladies were taught horseback riding, sailing and other activities, and they participated in traditional camp staples such as campfires and hiking.

"Mrs. Clark and Mrs. Mabley also knew that they wanted these girls to be prepared for a changing world and to be able to present themselves in society and in the working world," Harris said. 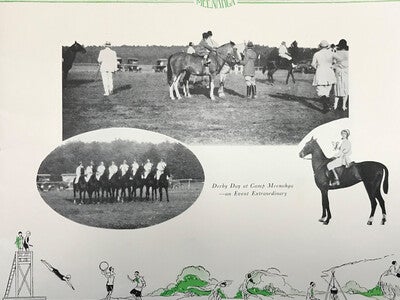 Harris said she hopes the book will not only serve as a reflection of a bygone era, but also that it delivers an important message about preserving history and memories from places like Camp Meenahga.

"On a deeper level, for me, the story of Camp Meenahga also tells how to live a life, (with) perseverance, friendship — the things you need to get through those changing times," she said. 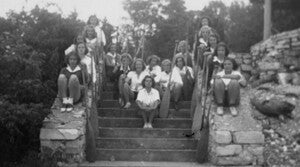 From the Lookout: Memories of Peninsula State Park's Summer Camp for Girls

From the Lookout: Memories of Peninsula State Park’s Summer Camp for Girls