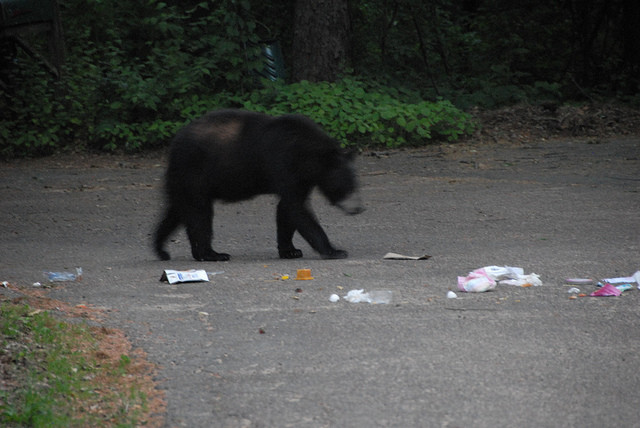 A bear roots through garbage on a street in northwestern Wisconsin.

Northern Wisconsin Village Puzzles Over What To Do About Nuisance Bears

Leaders in a northern Wisconsin village are grappling with what to do about bears roaming through its main street and people’s backyards.

Steve Hoffman, a wildlife supervisory specialist with the Department of Natural Resources, said the agency has been working with the village of Grantsburg to address nuisance bears for the last several years. He said they've educated people to keep food, bird feeders and trash away from them, and have even tagged and relocated bears.

Nevertheless, he said the bears keep coming back. As a result, the DNR has presented the village with several options for controlling problem bears, including traps, hunts and harvests. Hoffman said the goal isn't to eliminate the bears entirely, but "to reduce the numbers in the area here and try to reduce that contact between people and bears."

Nine bears were trapped in the village last year, and trapping for this year is currently underway. But Hoffman said some animals are "trap-shy."

"Ones who have been tagged will sniff them and go on their way," he said. "They’ve been in there before, and they’re not going to go in again … which makes that a difficult thing to get those animals out of here."

A second option would be to recruit hunters within and surrounding the village limits during the regular bear season, which begins Sept. 9. Hoffman said in that case, the village would have to allow the use of firearms on village property.

The third option is to issue nuisance shooting permits to target problem bears, lure them into an area and euthanize them.

Weighing The Options On The Table

Village Trustee Diane Barton said the village will look at all available options at a board meeting Monday.

"We’re at the point where our only option now is to do something to reduce their numbers," she said, noting that residents have raised concerns over sightings near schools.

Friends of the Wisconsin Wolf and Wildlife Executive Director Melissa Smith said they would like to see the village focus on prevention rather than bend to political pressure from residents. She said an alternative option could be "passing an ordinance that you need to have bear-safe trash cans or keep your garbage in a place where bears can’t access them at night."

Grantsburg Trustee Barton said they’ve sent out letters in people’s water bills and posted notices in the paper with limited success in solving the problem.

Another village trustee, Rod Kleiss, questions killing bears that come within or near village limits.

"To just go out and indiscriminately kill bears just to reduce wildlife — this is their home as much as it is ours," he said.

Kleiss also questioned whether bears are actually a problem or are just being observed more by residents.

"What are methods to determine the true severity or reality of the situation?" he said, requesting better documentation.

The DNR's Steve Hoffman did note it’s been difficult to differentiate between nuisance bears and sightings.

"In a lot of the cases, the complaints were,'I saw a bear in my backyard,'" he said. "That’s not really a complaint. The bear is there doing what he’s normally he doing. He just happens to be within the city limits."

However, Hoffman said the perception of danger is real for some residents who see bears regularly in their backyards.

Targeting Bears Throughout The Region

DNR Large Carnivore Specialist Dave MacFarland said Grantsburg is within the one portion of the state where they are trying to reduce the population through hunt or harvest.

The zone encompasses several counties, including Douglas, Ashland, Sawyer, Washburn and Burnett counties. Last year, the DNR set a goal to harvest 1,600 bears and killed 1,444. MacFarland said they want to maintain bear numbers statewide, which have grown to around 28,000.

"It’s really the primary tool that we use is to try to work with people to better understand bears and bear behavior and try to resolve those conflicts on their own," said MacFarland.

Smith said the use of hounding and baiting within bear hunts should be examined as to whether they’re playing a role with cases of nuisance bears.

The state received 832 bear complaints last year, 543 of which were resolved by educating people about steps they can take to avoid conflicts.