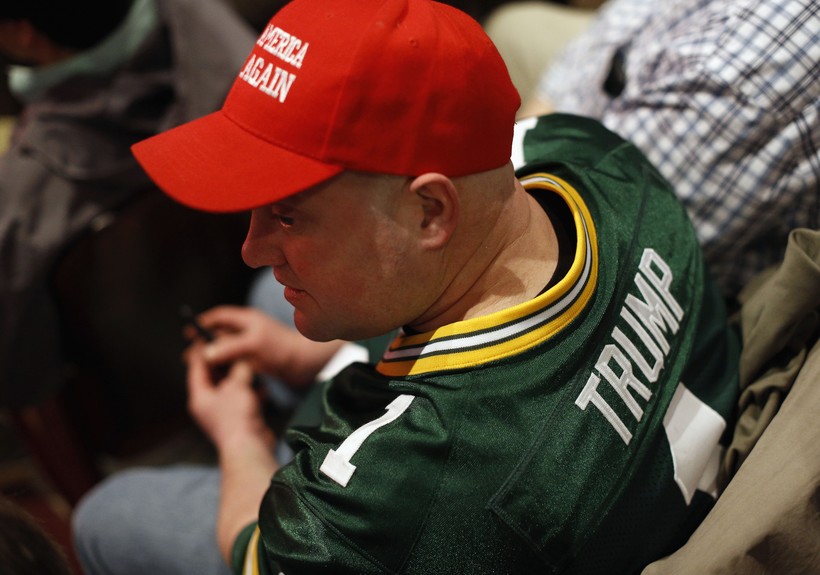 Albert Vetter of Green Bay wears his customized Packers jersey before a Trump campaign event in March, in De Pere.

The election season begins in earnest this weekend as the Republican Party of Wisconsin holds its annual convention in Green Bay. The city will play host to Democrats three weeks later.  Observers say it’s a sign of northeastern Wisconsin’s potential influence on several important races.

As to why both parties are holding their conventions in Green Bay, University of Wisconsin-Oshkosh political scientist Jim Simmons says it’s no coincidence: "This area happens to be a swing area and it’s very, very important."

According to Simmons, southwestern Wisconsin trends Democratic while the Southeastern part of the state is more reliably conservative.  Meanwhile Green Bay, the Fox Valley and points in between are different: "Larger numbers of independents, larger numbers of swing voters."  Simmons said it depends on who comes to the polls.

"When you look at the turnout in a presidential election year versus mid-term election year, you have increasing numbers of voters who claim to be independent or moderate," he said.

That’s important because partisans rarely split the ticket, while independents are more likely to do so, Simmons said.

Even the landscape and the people who live there are a mixed bag, according to Marian Krumberger, chair of the Brown County Republicans.

"We have cities, we have farms, we have pretty much a cross-section of people and representation of all Wisconsin voters," said Krumberger.

The region also has an open congressional seat. Incumbent Republican U.S. Rep. Reid Ribble isn’t running for re-election, and Wisconsin GOP spokesman Pat Garrett said that race, along with the presidential contest should be a big draw in November.

"Green Bay has always been an important battleground and we see that especially now," said Garrett. "Hillary Clinton continues to be viewed unfavorable and untrustworthy by voters in northeastern Wisconsin.  As you’ve noted (there's) a congressional race. We have three great candidates running."

State Democratic Party head Martha Laning said the party also has its eye on retaking the state Senate and she sees one of its best chances in a district that covers parts of Winnebago and Fond Du Lac counties.

"I think the 18th Senate District is a great example," Laning said. "We have two great candidates running in that district. We believe that’s a strong pick-up opportunity for us."

If ever there was a swing district the 18th is it.  Republicans have won the seat by less than 1 percentage point in each of the last two general elections.

Republican Randy Hopper lost the seat in the 2011 recall. Democrat Jessica King won by just over 2 percent but lost in the next year’s general by 600 votes to the now incumbent, Rick Gudex.

Democrats need to win at least three districts to get a Senate majority.

Another thing about northeastern Wisconsin: it’s a sizeable media market. Rich Langan with the Brown County Democrats said viewers and commercial radio listeners will be bombarded with ads and news coverage this election season.

"The hardest thing for a candidate to do is get his or her words or face out into the public," said Langan. "The biggest bang for your buck is the big media marketplaces and Green Bay is the second largest in the state so I think they’d be foolish not to come here."

And of course the presidential candidates will be a big draw, both at rallies and the polls, according to UW-Oshkosh's Simmons.

"The one last wild card in all this is Donald Trump," he said.

It’s an understatement to say that Trump has had a polarizing effect on voters this election cycle.  The question is how he’ll play to the swing voters of northeastern Wisconsin.