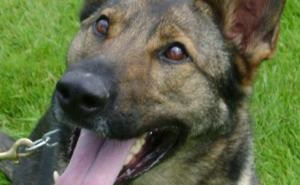 A nonprofit that allows unadoptable, retired military dogs and injured veterans to live together wants locate in Jackson County. This will be the first such facility built from the ground up in the nation.

Military working dogs fill many roles on the battlefield but sniffing for improvised explosive devices is one of their main lifesaving duties. After a dog is retired or becomes injured they go through temperament screenings to see if they qualify for adoption. If not, the dogs are euthanized. Danny Scheuer served in Iraq for two years and is working now to save dogs deemed by the military as liabilities, "I had a dog save my life twice in Iraq and he was put down because he was being too aggressive after he got hurt. So, this is my way of repaying."

Scheuer created Save-a-vet.org, which pairs dogs that can't be adopted with military veterans and retired police, "What we do is we take those dogs and then we hire military and law enforcement veterans that have been injured in the line of duty to take care of the dogs. Their payment for working for us is rent free housing."

Now, Scheuer is looking to build an apartment style complex with five units in the small village of Merrillan after a donation of six acres of land. But first Scheuer needs the village board to grant variances for zoning and a kennel ordinance for properties with more than three dogs. Village Trustee Margaret Young says the board seems to favor Scheuer's plan, "It was received pretty well by the board. We certainly feel it's a worthwhile project."

Saveavet.org has been around since 2006 and has facilities in Wisconsin, Illinois and Virginia.