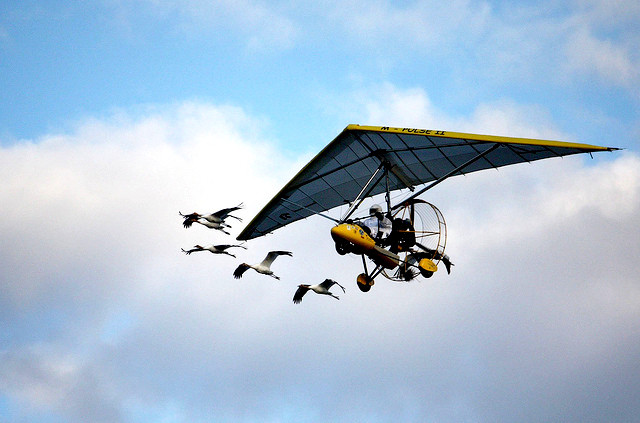 An Operation Migration pilot flying with whooping cranes in 2011.

Whooping Crane Conservationists To End Use Of Ultralight Aircraft In Migrations

US Fish And Wildlife Service Says It Wants To Shift Away From Human Intervention In Species' Reintroduction
By Chuck Quirmbach
Share:

Officials with the U.S. Fish and Wildlife Service said that they're ending migrations of whooping crane populations that are led by humans piloting ultralight aircraft.

Service officials said other changes will also be in store for the Whooping Crane Eastern Partnership, which has led efforts to develop a self-sustaining migrating flock of the large birds in the Eastern U.S. They said it may also change rearing of young cranes to lessen human intervention and put more focus on natural methods of rearing and releasing young whooping cranes.

Service officials said they recognize strides made by the crane reintroduction project during the its 15 years as there are nearly 100 cranes in the eastern population. However, officials also said a critical lack of reproductive success has hampered the effort.

The ultralight migration that began last fall has been delayed several times by high winds and currently is in Georgia. It will resume when weather permits to help the birds get to a wildlife refuge in Florida. Then, the ultralight component will end.