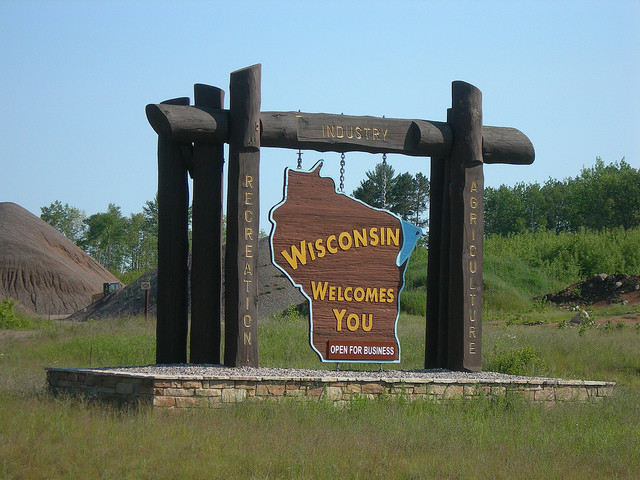 The sign welcoming drivers on U.S. Highway 2 into Wisconsin, with the words "open for business" on the bottom. Photo: Jimmy Emerson (CC-BY-NC-ND).

The Wisconsin Economic Development Corporation launched a new $1.6 million ad campaign last month to lure businesses to Wisconsin, but according to a University of Wisconsin economics professor, the campaign won’t likely result in an influx of new companies into the state.

The WEDC ads are appearing online, in print and on the radio in neighboring states.

One radio ad airing in Illinois begins by describing how Wisconsin’s Driftless Area escaped glaciation, creating points of elevation generally not seen in the Midwest.

“While states to the south are generally characterized as flat, Wisconsin rises with economic possibility — a land shaped by fiscal responsibility and gentle, business-friendly tax policy, creating an environment ideally suited to business growth,” the ad says.

The ad targets key aspects of Wisconsin’s economic landscape that are being touted as being attractive to businesses, including low corporate taxes, an educated workforce and good infrastructure. But even if the environment for business looks good on paper or sounds catchy in a radio jingle, it may not be enough to get businesses to make the move, according to Steve Deller, a professor of applied economics at UW-Madison. He said he's skeptical that the ads are worth the money.

Deller said when compared to neighboring states, Wisconsin does indeed have low corporate taxes and other economic indicators that have been described as “business-friendly.”

“But so what?” Deller said. “The problem is that businesses simply just don't move that much.”

Research shows that there are about 500,000 businesses in Wisconsin, and Deller said only about 5,000 have moved or changed addresses. Of those 5,000, the vast majority stayed in the state, moving less than 10 miles away.

Deller, who has studied business mobility for years, said most businesses in Wisconsin are home-grown, since the state is where the owner lived when they started their company. And typically, the most influential factors that motivate a business to cross state lines isn’t to move to a land of better economics — it’s a personal preference on the part of the business owner.

“There’s one example of a company that makes aftermarket parts for Harley Davidson. The company was originally in Chicago and they decided to move it out to the western part of (Wisconsin). And the reason was because the owner is a Harley-Davidson fan, and he loves riding along in the Driftless area,” Deller said. “It had nothing to do with taxes. It had nothing to do with an educated workforce.”