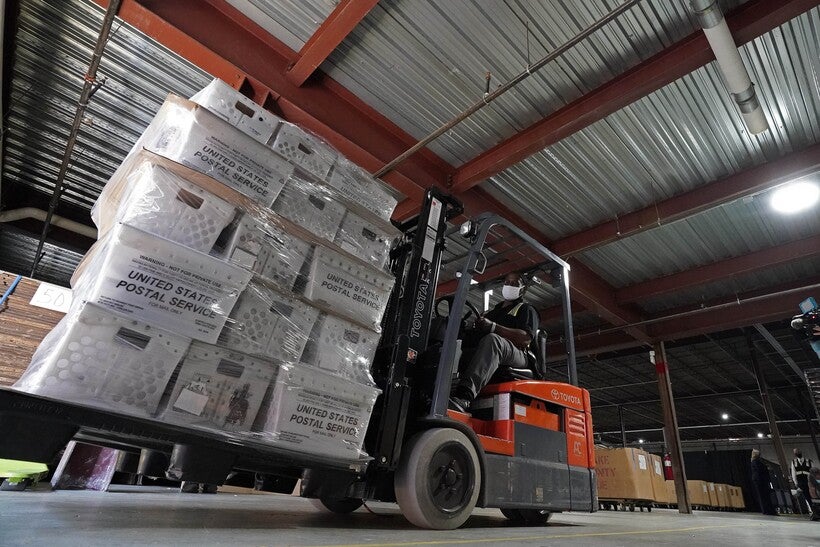 In this Sept. 3, 2020, file photo, a forklift operator loads absentee ballots for mailing at the Wake County Board of Elections as preparations for the upcoming election are ongoing in Raleigh, N.C. Gerry Broome/AP Photo

There will be no extensions granted to handle absentee ballots in Wisconsin following a U.S. Supreme Court ruling handed down Monday.

The 5-3 ruling from the court's conservative majority means absentee ballots will need to be returned by 8 p.m. Election Day.

It was a setback for the Democratic National Committee and other plaintiffs who brought the lawsuit. They argued the judicial system needed to step in to accommodate an influx of absentee ballots due to the coronavirus pandemic.

U.S. District Judge William Conley sided with Democrats in the case last month, granting a six-day extension for absentee ballots to be returned to clerks as long as they were postmarked by Election Day.

But Conley's ruling was reversed, first by a federal appeals court earlier this month, and Monday by the U.S. Supreme Court.

"No one doubts that conducting a national election amid a pandemic poses serious challenges," wrote Justice Neil Gorsuch. "But none of that means individual judges may improvise with their own election rules in place of those the people’s representatives have adopted."

"I respectfully dissent because the Court’s decision will disenfranchise large numbers of responsible voters in the midst of hazardous pandemic conditions," wrote Kagan.

Kagan noted Conley ordered a similar extension in a case from April, in the earlier days of the COVID-19 pandemic. According to a study by staff on the Wisconsin Elections Commission, that extension resulted in 79,000 ballots being counted that would have otherwise come in too late, even though voters met the deadlines spelled out in state law.

Since that time, Kagan noted the pandemic has only grown worse in Wisconsin.

"Wisconsin is one of the hottest of all COVID hotspots in the Nation," Kagan wrote.

While it's not the decision Democrats wanted, it was not altogether unexpected.

The Democratic Party of Wisconsin (DPW) issued a statement that focused on the options that remain for voting.

"Despite the efforts of Donald Trump, the Republican Party, and partisan Justices on the Supreme Court, voting remains easy, accessible, and convenient for Wisconsinites, and the Democratic Party of Wisconsin will double down on making sure that every Wisconsin voter knows how to exercise their sacred right to vote in the final eight days of this election," said DPW Chair Ben Wikler.

"Democrats' attempts to get the courts to rewrite Wisconsin’s election laws on the eve of an election have failed," said Hitt. "Absentee voting in Wisconsin is extremely easy and hundreds of thousands of people have done it already — last minute attempts to change election laws only cause more voter confusion and erode the integrity of our elections."

The Wisconsin Elections Commission also issued a statement Monday night urging voters to act quickly — if not immediately — if they want to vote absentee.

"Please do not wait for the legal deadline," said Wisconsin Elections Commission administrator Meagan Wolfe. "The absentee by mail deadlines in law don’t correspond with the amount of time it may take to receive and return your ballot by mail."

The Elections Commission said after Tuesday, Oct. 27, voters should find other options for returning their absentee ballots, which include delivering it to their municipal clerk's office or a secure drop box if one is provided.

Clerks can also offer in-person absentee voting, which is commonly referred to as early voting. The last day they're allowed to offer that option under state law is Sunday, Nov. 1.