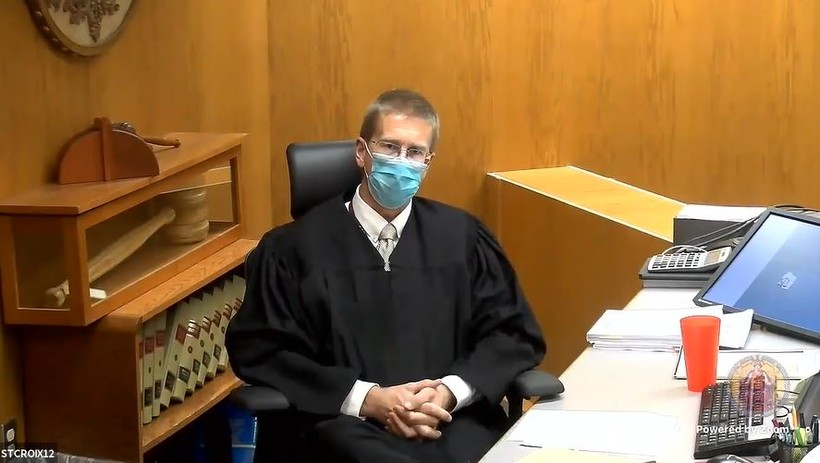 Judge Questions Need For Court To Rule On Mask Mandate

Judge Michael Waterman Asked Why Lawmakers Had Not Voted To Overturn The Order If They Object To It
By Shawn Johnson
Share:

A judge hearing the lawsuit over Wisconsin's statewide mask mandate repeatedly asked a lawyer for conservatives at a Monday hearing why he should block the mandate when the Legislature has decided not to.

"They could do it tomorrow if they wanted to," said St. Croix County Judge Michael Waterman.

The lawsuit, which was brought by the conservative Wisconsin Institute for Law and Liberty (WILL) on behalf of three Wisconsin residents, argues Democratic Gov. Tony Evers overstepped his authority when he issued and later extended a statewide mask mandate this year.

Evers issued the mandate using a state law that gives governors the power to order 60-day public health emergencies in Wisconsin. It's different than the law his administration used earlier this year to issue its "Safer at Home" order, which was struck down in May by the Wisconsin Supreme Court.

WILL argued that because a governor's public health emergency declaration "shall not exceed 60 days" unless it's extended by the Legislature, Evers' second and third public health declarations were invalid, and the court should strike them down.

"The pandemic that we had in July and September is the same one we had in March," said WILL attorney Anthony LoCoco. "It's the same essential public health problem: The spread of a novel virus."

LoCoco said that for many people, wearing a mask may seem simple, smart and courteous, and they may not care the government had ordered them to wear masks.

"But my clients do care," LoCoco said. "They are aggrieved by this invasion of their liberty."

While some Republicans have said they'd like to vote to override Evers' orders, Assembly Speaker Robin Vos, R-Rochester, and Sen. Majority Leader Scott Fitzgerald, R-Juneau have resisted calls to bring lawmakers back to Madison. Last week, they asked a private attorney working for the Legislature to file a brief in support of the lawsuit instead.

"They're asking the third branch of government — the judiciary — to step in and exercise a power that the Legislature reserved to itself," said Waterman. "The court is being asked to do that when the Legislature has apparently chosen for one reason or another not to act."

Evers' attorney, Assistant Attorney General Colin Hector, stressed the nature of the COVID-19 pandemic now was worsening, making this a different emergency than the ones the state had dealt with at other points this year.

"The data here is screaming out that unfortunately, Wisconsin right now is in a very different and much worse situation than it has been," Hector said.

Wisconsin's recent COVID-19 numbers have been among the worst in the nation with a seven-day average of nearly 2,400 positive daily cases. In mid-May, that number was less than 300. The number of people hospitalized for COVID-19 also hit an all-time high of 782 Monday.

Hector also stressed the law Evers used to declare an emergency gave the Legislature the express power to end it.

"They have to take a political act," Hector said. "It can't possibly be the case that they can have the courts make that decision for them."

Democrats have argued Republicans won't vote to rescind the mask mandate because it's popular. In early August, 69 percent of registered voters surveyed by Marquette University favored a mask mandate compared to 29 percent who opposed it.

Waterman said he would take the case under advisement and issue a written order soon.

While the case is in his courtroom for now, the Wisconsin Supreme Court will likely have the final say on the mask mandate and the governor's powers. What happens there is not yet clear.

While the court struck down "Safer at Home" in May, it had a 5-2 conservative majority at the time, a margin that has since been trimmed to 4-3.

That would put the focus squarely on conservative Justice Brian Hagedorn, who joined the court's liberals in siding with the Evers administration earlier this year.