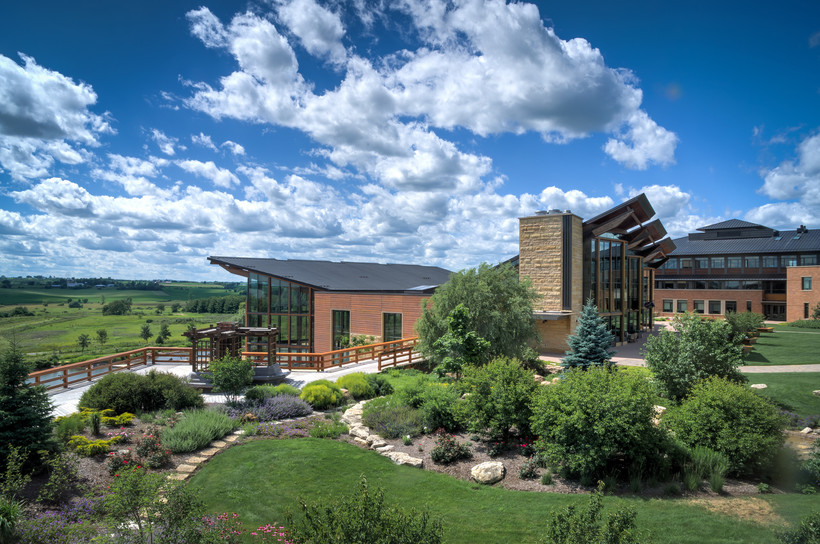 'I Could Easily End Up On A Ventilator': Epic Systems Employees Decry Company Policy Amid Pandemic

A move to require employees to return to in-person work during the COVID-19 pandemic has hundreds of workers at a Madison-area software company pushing back, saying high-level management has rebuffed concerns about high-risk employee’s health, as well as the possibility of the company’s policy contributing to more community spread of the virus.

In more than two dozen phone conversations, emails and text messages with WPR on Tuesday, employees at Epic Systems, a multibillion-dollar healthcare records company based in Verona, expressed strong concerns and fears about a plan that would require almost all employees — even those with medical conditions that compromise their immune systems — to return to in-person work by Nov. 2, at the latest.

John, an employee with a high-risk health condition who spoke on the condition of only using his middle name for fear of being fired, said he feels like he’s being forced to decide between taking his medication and losing his job.

"I could easily end up on a ventilator (if I got COVID-19)," he said. "My body is incapable of fighting off some of those tougher infections."

Without his medication, John can’t eat enough to be healthy. Before starting the medicine, he only weighed 110 pounds at 5 feet, 8 inches.

"I’m kind of faced with that predicament of, 'Do I take my meds, do I not take my meds?'" he said.

Though about a third of the company’s roughly 10,000 employees are already reporting to work in person at Epic’s sprawling, nearly 1,000-acre campus, the first set of employees being required to return to in-person work will begin on Monday. Other sets of employees will be phased in over the following weeks, depending on job title and where they work on the campus.

John is set to return late next month, but there’s a possibility that could be delayed to Nov. 2. First, he has to meet with Epic personnel workers to determine if the company believes his health condition qualifies him for a later start date.

"We have to jump through hurdles just to get some kind of accommodation," he said. "I just want everyone to be as safe as they feel they need to be."

More than 400 workers have signed an employee-created petition opposing the policy or filled out a survey, also circulated by concerned workers, to outline their reservations.

Matt, who asked to use a pseudonym for fear of company reprisals, quit his job at Epic in April because of its slow response to the pandemic. He’s still afraid of retribution for commenting publicly because he hopes to work at a consulting company that has regular contact with Epic.

"We were all still traveling when the pandemic was beginning to spread in the U.S.," he said. "They were very slow getting to work from home and it was a process … they were just so reluctant to get there."

Matt said employee concerns about the speed of the company’s response were dismissed.

"The culture there was very much, 'Do as they say and don’t question,'" he said.

Several other employees told WPR their emails to a company email address dedicated to fielding questions and concerns about Epic's policies related to the pandemic have gone unanswered.

Noah, a current employee who was only comfortable with his first name being publicly disclosed, said he isn't only concerned about his personal safety after returning to the bustling campus.

"I also think it’s irresponsible to do as a citizen of Madison and Dane County," he said. "The folks who work at Epic are, on the whole, young and healthy and we wouldn’t be the folks who are most at risk by this decision. I’m worried about the people I see in the grocery store or in my neighborhood."

According to the latest numbers from the state Department of Health Services, Dane County has had 4,230 confirmed cases of the virus and 37 deaths. Dane County is designated by the state as a county with a high level of virus activity.

Noah and several other Epic employees told WPR their closest managers have been receptive to concerns, but those concerns seem to go nowhere when they reach upper-level management.

"The tone has been really dismissive and frankly patronizing that they don’t trust us to know what’s best for our physical and mental health," Noah said. "Epic really doesn’t value its employees as people and as equals in the company."

Several workers said they have heard about mid-level managers being demoted for voicing concerns about the company’s pandemic-related policies. One employee confirmed there have been recent title changes in his department, but hasn’t confirmed why they took place.

Meanwhile, the company maintains it needs to return to in-person work to better serve healthcare organizations treating patients amid the pandemic.

"Saving lives is our highest priority," the company said in a prepared statement on Tuesday evening. "Over two-thirds of the country have medical records in Epic and our software has helped save many thousands of lives."

In the statement, the company said it has been tasked with developing new software during the pandemic and, "our experience has been that results are much better and faster when staff are able to collaborate on new and creative ideas during in-person brainstorming."

"This in-person collaboration, with masks and safe physical distancing, is essential to saving more lives," the statement said.

In a Monday email to employees obtained by WPR, company CEO Judy Faulkner said the company is "coming back as safely as possible."

Faulkner reiterated employees would be given private offices at their request, that all employees will be required to complete a daily health survey before coming to work and that access to the campus dining area will be granted in shifts to prevent crowds. She said the company is consulting with infectious disease experts and local health officials about its reopening and is not ruling out possible policy changes or adjustments in the future.

Still, she said the company is pushing for in-person work amid the pandemic because it believes employees are more productive when they are able to meet in person.

"Staff who have returned to campus say there are many reasons why working at Epic is better," Faulkner wrote. "For example, they say that when we are at work, we are on the Epic network and connections to the software and to each other are better. You can shut the office door and focus without distractions, which is not always possible if you live with others or in a noisy environment."

Employees rebuff those claims and argue they haven't been provided with any evidence the company has been less productive during recent months, when the majority of workers have been logging in from home.

In her email, Faulkner encouraged Epic employees to consider themselves "heroes."

"You have heard us say many times that our customers are heroes, and we are heroes helping heroes," she wrote. "It's not easy to be a hero."