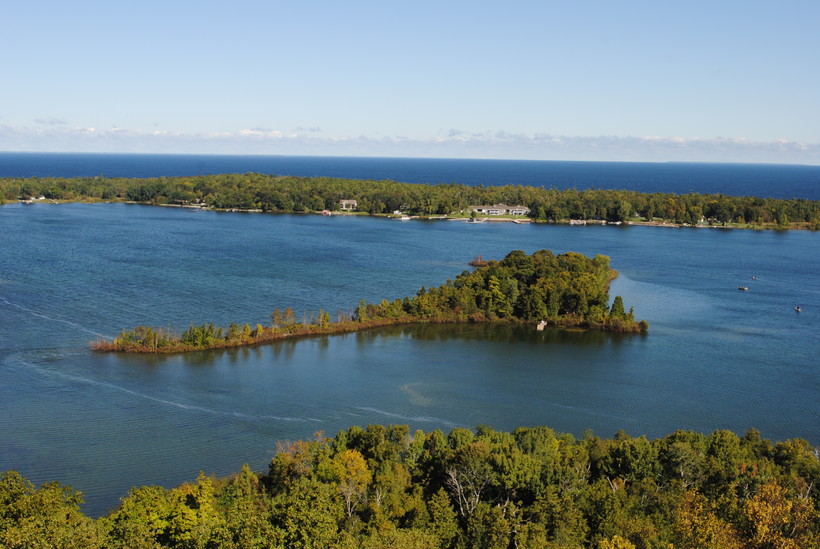 Visitors to Potawatomi State Park have caught the same view since 1932: a sweeping panorama of Sawyer Harbor, Sturgeon Bay and Green Bay, broken up by miles of green, auburn or yellow forest, depending on the season.

But the park’s 75-foot-tall observation tower — built when Herbert Hoover was president — may be nearing the end of its days.

This month, the Wisconsin Department of Natural Resources permanently closed the tower, citing significant wood decay that made the tower unsafe.

In a press release, Wisconsin State Park System Director Ben Bergey said there are no plans to replace the tower.

But there are plans to replace Eagle Tower. A final design was selected in November, but construction has yet to begin. An independent nonprofit group, Friends of Peninsula State Park, is working to raise half of the funds required for that tower, which would include a ramp.

But some, like state Sen. Robert Cowles, R - Green Bay, are concerned about both the slow pace of the Eagle Tower replacement and the impending removal of the Potawatomi State Park tower.

Cowles, R-Green Bay, says the loss of the towers could have a "chilling effect" on local tourism. But he says they’re just a piece of the problem.

"I am concerned about the observation tower, but I am also concerned about the broader situation with maintenance of our state parks," he said. "... These parks are not to be taken for granted, and I think to a certain extent, our government has done that. And because of that, there’s not enough money to maintain that."

In 2015, Gov. Scott Walker eliminated state funding for the state park system, more than $4.5 million per year, with the goal that the parks become "self-sustaining."

But as Cowles argues, that hasn’t happened. He says the state’s eroding towers and trails, and the need for private funding for a state-owned tower, is proof.

According to a 2013 DNR report, the state park system has on average 14 million visitors each year. Most of the money spent by state park visitors — an estimated $580 million — comes from people not local to the region or state.

Cowles worries that further raising the price of admission to the parks to help fund their operating costs, as proposed, could make state parks less accessible for the middle class.

"If there’s a gradual erosion of the amenities, the things that make it a complete experience, we could have an erosion of the sales tax money coming to the state," he said. "And a degradation of the experience that sort of makes Wisconsin a nifty place to live."

Cowles says he wants to see the tower replaced in the same spot, as quickly and as economically as possible.

In a press release, Bergey did not rule out the possibility of future observation towers in Potawatomi State Park.

"We welcome opportunities to work with partners to provide additional recreation opportunities at the park, which could include new observation facilities in the future," he said.

Seth Rogen On The Comedy Advice He Got At 12 That He Still Thinks About
Cancel The Olympics, Says Tokyo Doctors Association
To Be Carbon-Neutral By 2050, No New Oil And Coal Projects, Report Says
Author John Green Explores How To Live In Uncertainty In 'The Anthropocene Reviewed'
Racism Derails Black Men's Health, Even As Education Levels Rise