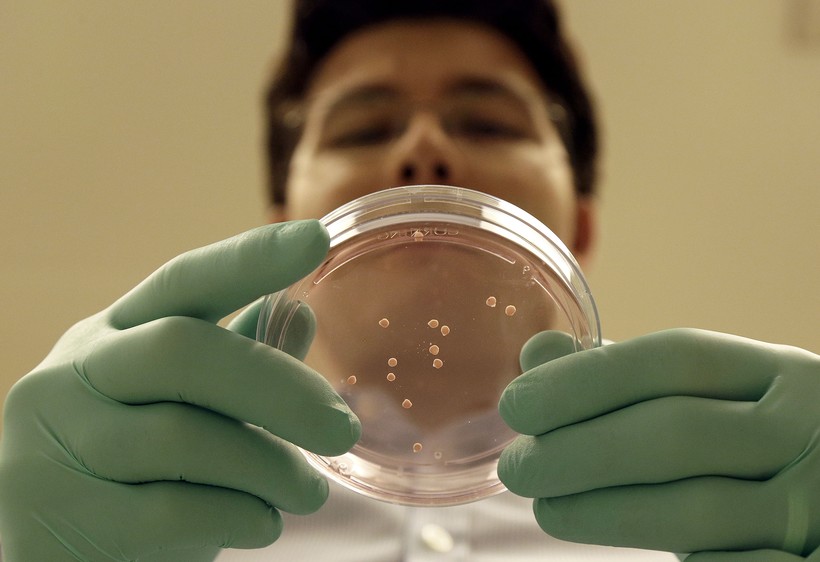 Dr. Sergiu Pasca, a neuroscientist, holds a sample of cortical spheroids while posing for photos in his lab at Stanford University in Palo Alto, Calif., in 2015. Jeff Chiu/AP Photo

But They're Still Worthy Of Ethics Discussion, Ethicist Says
By Elizabeth Dohms-Harter
Share:

It may sound straight out of a spooky Halloween movie, but this is real life: scientists at the University of Pennsylvania have found a way to make tiny brains and foster their growth. But unlike Hollywood horror tropes like glowing cerebrums and lab assistants screaming "it’s alive," these brains have no agenda.

These "mini brains" aren't fully developed and only mimic a portion of the human brain. That implies no consciousness, said Insoo Hyun, a professor of bioethics at the Case Western Reserve University and director of the CWRU Stem Cell Ethics Center, noting that consciousness requires the entire human brain and a significant amount of development.

"And it involves signaling across major regions, so if you don't have yet all the regions of the brain modeled and all the cell types, then biologically you just don't have the basis for consciousness, so we believe," he said.

Still, he said with the advent of stem cells being used to create these partial brains, it opens up discussions between the scientific and ethics communities to talk about the social implications of the research.

"(Scientists) realize that there is kind of an artificial distinction or divide between this idea of science is one thing, ethics is the other; they realize the science they're doing, if they want to do it well, has to involve ethical considerations," he said.

If scientists are able to aid in development of a brain where consciousness, sensation or experience is possible, it opens up a Pandora's box of questions, namely, how would scientists know that's even happening?

"You can't ask the brain, 'Hey, how are you feeling today?'" he said. "And obviously there is no way to respond. There's no input or output to this model, right? It's just a cluster of really interlocking cells and tissue."

The brains used by scientists are developed from cells of volunteers or healthy patients. Cells are retrieved from their bodies — they can be blood, skin or even gut cells — and are reprogrammed so they have the capacity to be any kind of cell.

"And once you get the stem cells, you can direct them to different kinds of cell lineages in the human body," he said.

Cells that have been nudged toward brain development will talk to each other and enter the stages of human development, he said.

The purpose of the research, Hyun said, is to study brain development and to conduct medical tests such as drug screenings or other experiments on both healthy and diseased brains.

"This great tool for developmental biologists who want to study an aspect of human biology you otherwise cannot observe in the laboratory," he said.

Discoveries were made a few years ago that stem cells have the capacity to organize themselves into clusters of brain tissue, representing regions of the brain. If these "brains" are allowed to grow for more than a year, they begin to act more like adult brains do, Hyun said.

But giving the brain models enough time to mature is difficult, Hyun said, in part because scientists have a tough time keeping the brain alive without blood vessels that carry enough nutrients to it.

The field is advancing though, with scientists pairing lab-grown brains models with bioengineering devices — something that doesn't exist in nature

"The researchers realized these are highly unusual novel entities — they don't even really know what to call them of these things — and they need the help of people like me to think through some of the issues before you do an experiment that eventually many people are very, very upset about."