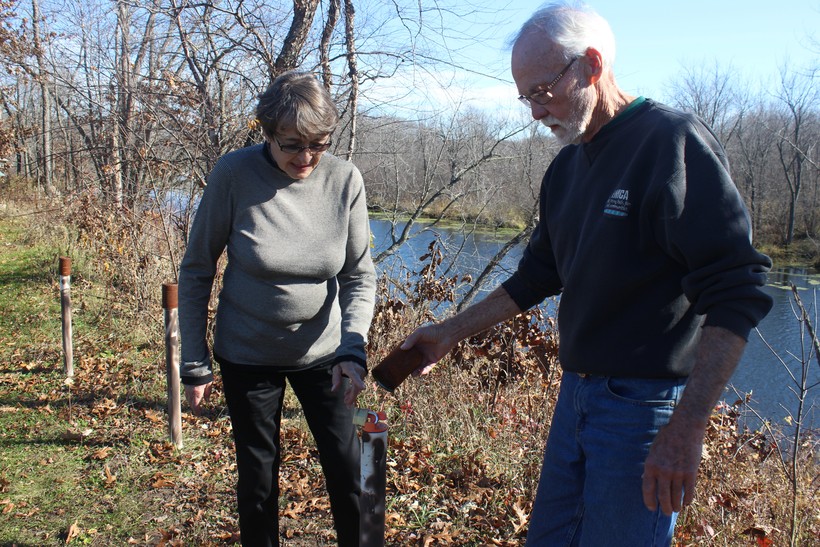 Doug and Sherryl Jones show a monitoring well on their property in rural Spring Green.

When Doug and Sherryl Jones built their house 15 years ago in Spring Green on the banks of a lake near the Wisconsin River, they were hoping it would be a little piece of heaven in their retirement.

What they didn’t know was that the level of nitrate in their well water was much higher than what officials the U.S. Enviromental Protection Agency say is safe to drink.

The Joneses immediately switched to bottled water when they learned that high levels of nitrate can cause a rare but serious condition called blue baby syndrome in infants. Researchers are studying other possible effects of nitrate exposure including cancers, thyroid problems, birth defects and diabetes.

The Joneses are far from alone: 1 in 5 private wells in Wisconsin’s agricultural areas is unsafe to drink due to nitrate levels, according to state data. All told, more than 90,000 Wisconsin households might be affected.

Nitrate gets into drinking water largely through agricultural runoff. When farmers apply nitrogen-containing fertilizer — including manure — to the soil, it can eventually run down into the groundwater.

Dave Marshall worked at the state Department of Natural Resources until 2006, and now studies the lower Wisconsin Riverway independently. He’s been testing the water near the Joneses’ house.

"I was amazed at how high the nitrate levels are in the groundwater," said Marshall.

He has studied Wisconsin water for 30 years and he said the pollution has gotten worse over the last decade. However, he said right now the DNR can’t or won't do much to address the issue because of changes made to the department. The DNR has reorganized and cut upwards of 600 positions during the past 20 years, including scientists.

Enforcement by the DNR has also declined in recent years, and in some cases, the agency has said it lacks legal authority to carry out that responsibility.

"The department was established using science to protect natural resources for the common good, and now we're seeing that it's become a tool for special interest," Marshall said. "The big ag lobby, for instance."

Sherryl Jones said she thinks the department should be doing more to help residents with polluted water.

So last month, Marshall and the Joneses signed a petition asking the EPA to make the DNR improve its enforcement of the Clean Water Act. If the department doesn't, the petitioners want the power to go back to federal regulators at the EPA.

DNR officials wouldn't comment on the issue, but sent out a written statement from Secretary Cathy Stepp that said: "Wisconsin takes its responsibilities to implement the Clean Water Act very seriously."

Kimberlee Wright, the executive director of Midwest Environmental Advocates, the law firm that represents the petitioners, said if the petition doesn’t go through, there would be other legal options to pursue.

"These aren't just inconveniences for people; these are serious public health risks for people," said Wright. "If you've got animal manure in your well and you've got high nitrates in your well, you need, you need action. So, yeah, that's that we've done everything that we feel we can do."

For now, Doug and Sherryl Jones have switched to a reverse osmosis system for filtering their water. It costs them about $25 a month, which Doug Jones said is a big price tag that not everyone can afford to pay.

Editor's Note: This story was produced in partnership with the Wisconsin Center for Investigative Journalism. For more on the story, visit wisconsinwatch.org.