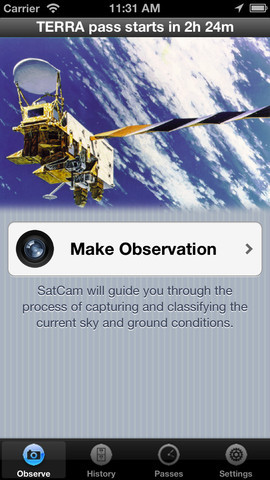 We’re used to thinking of technology as providing valuable tools for scientists. And of course, those of us with smartphones are familiar with a wide variety of apps that help us with everything from finding a restaurant to reading the latest news headlines. But it’s not often that personal cell phones can generate information that’s of use to researchers, and give the owner some fun data as well.

Liam Gumley has found a way to do just that. Gumley is a satellite researcher in the University of Wisconsin-Madison's Space Science and Engineering Center (SSEC). He was charged with assessing and improving the available data about the Suomi NPP satellite before and after its launch in October 2011. And what he realized was that there are a lot of people with the instrumentation to do it right in their pockets.

"Smartphones have cameras, they have GPS, they have Internet connections," he said. "Let's put those to work."

The result is the SatCam app. Developed by Gumley, Dave Parker and a team of SSEC researchers, the app is set to know when one of three weather satellites is going to pass overhead. The satellites -- Suomi NPP, and NASA's Terra and Aqua -- collect data on the Earth's weather and climate. The app signals the user to take a photo of the sky at the time of the pass over, and also a photo aimed at the horizon to give topographical information. The user then categorizes the cloud cover, like the National Weather Services does, as well as classifying the surroundings as urban, forest, water, etc. The data is sent and then analyzed and compared to other data collected.

It’s a complicated system at work, but the developers tried to make it as easy to use as possible.

"We tried to make it so a scientist could use it or a kid in sixth grade could use it. It had to be easy and intuitive; no pressure that you would do it wrong somehow," Gumley said. "And we wanted to give people a reward for helping -- something interesting and unique, but not expensive. So, we send you back the picture the satellite took of you."

Well, not exactly of you, since that is too finely detailed an image for the satellite to generate. But it will give a person an image of the area in which they were standing when they took the photo. And it only takes about 30 minutes for that image to be processed and returned to you.

So, is this just another fun app, or are we actually helping the professional researchers? Steve Ackerman is the director of the Cooperative Institute for Meteorological Satellite Studies at UW-Madison, and a professor of atmospheric sciences. He assures us that we are providing a valuable service.

In his work, for instance, he looks for whether a particular satellite view has cloud cover or not. There are a number of ways to verify that, but this app provides important data for validating the findings in many areas of the world, and by many different people.

"The app leverages a big stack of infrastructure starting here at the Space Science and Engineering Center in Madison and going all the way up to the very expensive satellites in orbit," he said.

Ackerman uses it himself in a couple of different ways. When he’s in a new area, he likes to use SatCam when it’s clear out, because then he can really see the geography of the place. But when he’s on familiar territory, it’s a little different.

“You look up in the sky and … ‘there’s a cloud over there.’ And then you get the satellite image back, and it’s ‘No! That cloud was in Illinois!’ And it looked like it was right over us," he said.

Ackerman said that “Madison has been called ‘the mecca of satellite meteorology’ in the sense that if you do satellites and weather, you’ve got to come and visit the UW-Madison campus at some point in your career.”

So it makes sense that the SatCam app would be developed here.

SatCam is currently available for iPhones and iPads. There are plans for an Android version in the future. If you’d like to join the effort, you can download the free SatCam app for iOS devices and get to work.