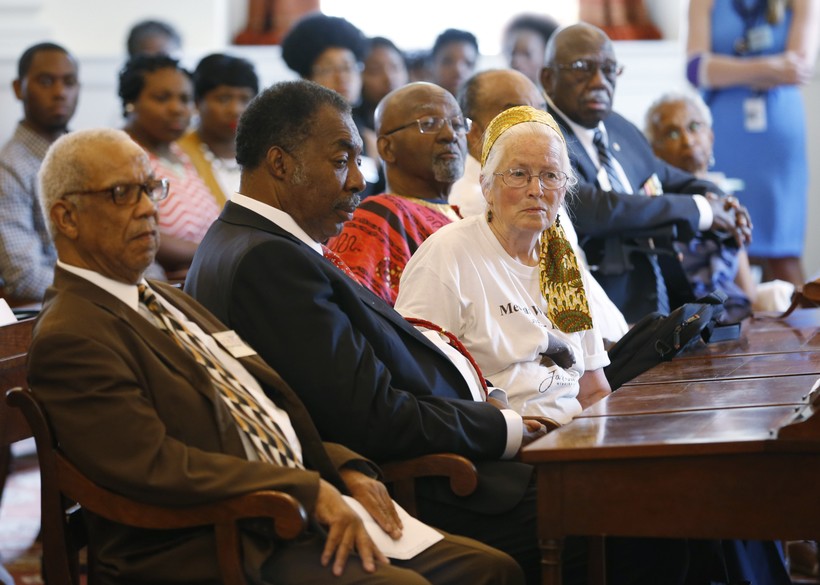 Several of the original Freedom riders, Rev. Reginal Green, left, Hank Thomas, second from left, and Joan Trumpauer Mulholland, center, listen to Virginia Gov. Terry McAuliffe, as he greets them in the Old House Chambers at the Capitol in Richmond, Va., July 2, 2014. The group came to Virginia to help commemorate the 50th anniversary of the Civil Rights Act. Steve Helber/AP Photo

Joan Trumpauer Mulholland — A Freedom Rider — Is The Subject Of Her Son's Documentary
By Elizabeth Dohms
Share:

Joan Trumpauer Mulholland's decision to be a voice for equal rights came when she was about 10 years old.

She and a playmate snuck off to a black neighborhood in Oconee, Georgia and passed by a school that resembled a shack — the building hadn't been painted, the windows were glassless and there was no playground, not even grass. Comparing it to the intricate, well-maintained buildings on the other side of town, something stirred inside Mulholland.

"This was not fair," she said. "This was not treating people the way we wanted to be treated like we had been taught in Sunday school."

Resolving to make a difference when she was able to, Mulholland participated in sit-ins during college and later became a Freedom Rider — a group of activists who were met with violence and threats of death as they spent seven months riding buses throughout the South in 1961.

Segregationists assumed the Freedom Riders were part of a northern invasion of the South — working to abate segregation.

While the first cohort of bus riders made it without incident from Washington D.C. through Virginia and North Carolina, once they arrived in South Carolina, three riders were beaten and others were arrested.

Then, on Mother's Day in 1961, more than 100 members of the Ku Klux Klan smashed windows, slashed tires and set on fire one of the Freedom buses in Anniston, Alabama.

Mulholland shared her experience Thursday, March 14, during a presentation in Wausau based on a documentary, "An Ordinary Hero," produced by her son Loki Mulholland, though she's admittedly not fond of being dubbed a hero.

"My son happened to end up being a filmmaker and he outed me, tricked me into it, mind you," she joked. "Lived up to the name Loki after the Norse god of mischief."

Although numerous changes have come about since the 1960s when civil rights activism dominated the conversation, Mulholland argued that much has stayed the same. Discrimination, much like televisions back then, was a black and white issue. Now, it's seen in all sorts of colors, she said.

Mulholland also noted that the advent of the internet has brought with it numerous changes — as it can be an effective tool for forwarding a cause — but she cautioned that signing an online petition isn't the same as activism, even if putting "your body where your mouth is" can pose dangerous risks of violence or jail time.

"Yeah, it could be physically dangerous, but I mean we're going to die in the end," she said. "Do we want to die trying to cross the street at rush hour, or do we want to die for something we believe in?"

She said while it was her generation that took care of the legalities of segregation, racism is a reality for the younger generations to fight. Mulholland encourages them to nonviolently take up a cause they believe in.

"The revolution isn't over," she said. 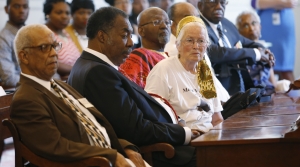 Joan Trumpauer Mullholland was one of the famed Freedom Riders, activists that challenged segregated busing in the American South in 1961. She joins us ahead of a talk at Wausau East High School about her life in the civil rights movement and combating racism today.