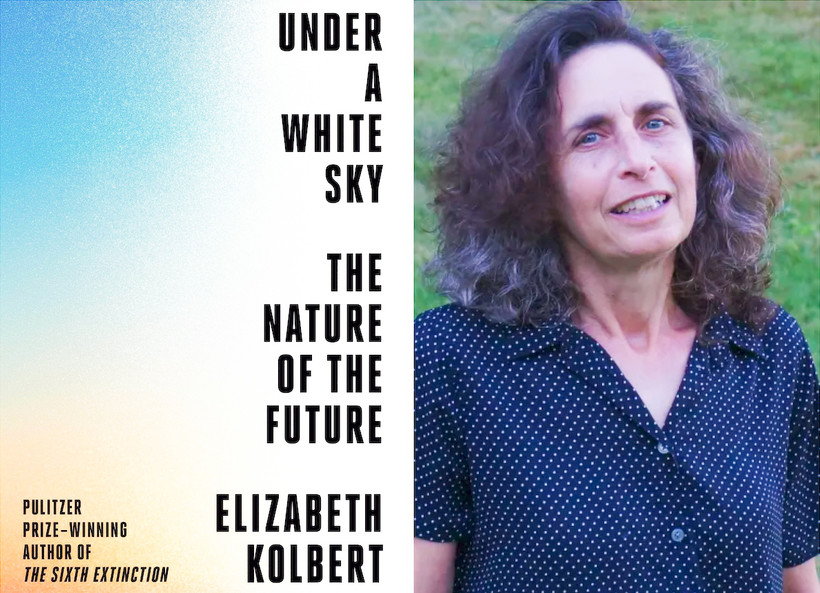 Author Elizabeth Kolbert and the cover of her new book "Under a White Sky: The Nature of the Future." Images courtesy of Crown/Penguin Random House.

In New Book, Journalist Elizabeth Kolbert Asks If Technology Can Save Us From Climate Change

Climate scientists warn not nearly enough is being done to mitigate the effects of climate change and Earth is quickly approaching the point of no return.

Pulitzer Prize-winning journalist Elizabeth Kolbert is out with a new book examining potential solutions to the effects of a warming planet. From engineers transforming carbon emissions to stone in Iceland to researchers in Australia working to develop coral that can withstand a hotter planet, "Under a White Sky" looks to answer the question: Can technology save us from the climate crisis?

Kolbert recently shared her thoughts on some of the solutions she reported on with WPR’s "The Morning Show" host Kate Archer Kent.

The story sort of begins back at the turn of the 20th century when Chicago needed to solve its solid waste problem. Chicago had grown up along the Chicago River, which flowed east into Lake Michigan. The city took its drinking water out of Lake Michigan and was pouring all of its waste, animal and human, into the Chicago River to get rid of it. And it was said the river was so thick with filth that a chicken could walk across it without getting its feet wet.

And so to solve this the city leaders in Chicago decided to undertake this massive construction project, really the biggest of its kind at the time, to reverse the flow of the Chicago River so it would flow out of the lake and into the Mississippi drainage system.

This was a success on one level, but there were unintended consequences. The Great Lakes and Mississippi drainage basins used to be separate. If you were a fish, you couldn't swim out of one and into the other. But now they aren’t. In the 20th century, both the Mississippi and Great Lakes system became highly invaded systems with invasive species, like the Asian carp, wreaking havoc. Asian carp are very fertile and extremely effective filter feeders. They basically eat every other species out of the house.

Congress said to the Army Corps of Engineers: Do something to separate these waterways without actually separating them. What the Corps came up with were these electric barriers that pulse a lot of electricity into the water to repel the fish from entering the Great Lakes. And the question of whether these barriers have worked or not is a very open one.

On Louisiana losing land to the Mississippi River

Southern Louisiana was formed over many millennia by the Mississippi overflowing its banks, basically, and dumping the sediment that it's carried at the mouth of the river, and that is how the land formed. It would form what's called a delta lobe, that would become too steep, the river would switch course and form a new delta lobe — and that is southern Louisiana, all this combination of Delta lobe built over many thousands of years. Then starting in 1718, when the French founded New Orleans, they decided they couldn't really allow the river to overflow its banks anymore or to flip around because New Orleans was there. So the river was going to have to be made to stay put.

And there's been a 300-year effort to compel the river to stay put, which has, you know, been fairly successful, though we have had obviously major Mississippi floods in there. So successful, though, that we no longer get any sediment coming out of the river at all, it just basically shoots into the Gulf of Mexico. New Orleans is one of the fastest sinking places on Earth because it doesn't get any of that sediment anymore.

Engineers in Louisiana are trying to create controlled flooding through these huge structures called sediment diversions to counteract the effects of flood control. They will hopefully prolong the life of the delta, but over the long haul as sea levels rise owing to climate change and as much of the state continues to sink, they're in a tough spot.

It's really early. I think everyone who follows climate policy would say the president has come in quite strong with a whole slew of executive orders that overturned policies designed to promote fossil fuel use. One executive order directed federal agencies to try to use their purchasing power, which is very high, to foster clean energy and electric vehicles. So I think that they've taken a lot of very strong stands and appointed very good people to key positions.

Now that being said, it's very difficult to move things where we need to in terms of emissions simply through executive action. You really need some kind of legislation. And unfortunately, this country has not seen a piece of major environmental legislation since 1990. And it's very hard to solve new problems with old laws. 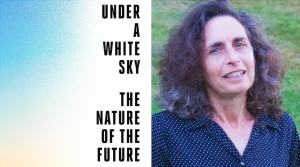 Earth is quickly approaching a point of no return with global warming, climate change and harm done to the environment. In her new book “Under a White Sky,” Pulitzer Prize-winning author Elizabeth Kolbert explores extreme ideas and out-of-the-box thinking to reverse course and repair the planet.