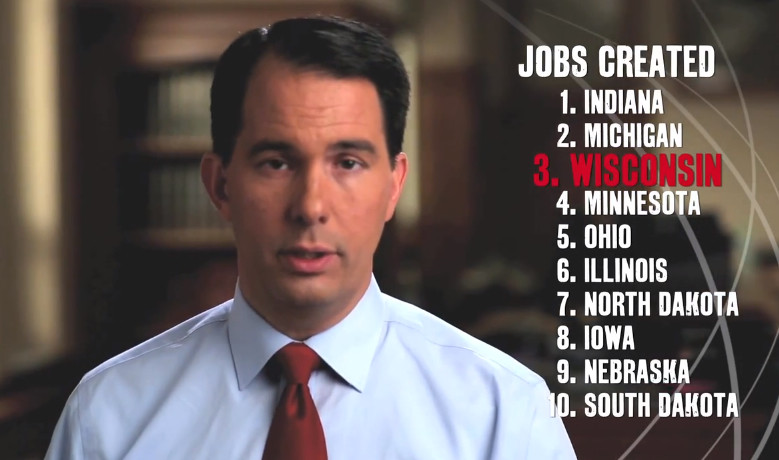 Above, a frame from the most recent Walker ad.

In New Ad, Walker Cites Jobs Numbers From Survey He Once Derided

In the new ad, Walker informs viewers that the latest job numbers are in, then reads off a list of Midwest states that ranks behind Wisconsin. The governor reaches this conclusion: “That means we ranked third in the Midwest.”

Walker's numbers are based on cumulative monthly estimates between July of last year and July of this year. These are the same monthly estimates Walker attacked as unreliable during his recall campaign. Department of Workforce Development Secretary Reggie Newson described them as numbers that are “inaccurate,” and that “cannot be trusted.”

Asked about the apparent change of heart, Walker said he was being consistent. Walker said the monthly estimates might fluctuate.

“But on an annual basis, where those numbers get adjusted one month after another, we think until the next (Quarterly Census of Employment and Wages) numbers come out, these are the most accurate, up-to-date numbers,” he said.

“Now he's cherry-picking numbers and using sources for numbers that he himself said shouldn't be used two years ago,” she said. “So it's all just to distract from the poor jobs record that he has.”

Walker's administration released the latest quarterly census job numbers last night, showing Wisconsin added nearly 29,000 private-sector jobs in the 12 months leading up to March of this year. That's very close to the number of jobs added in the last quarterly report, when Wisconsin ranked 37th in the nation.

Watch the new ad below: