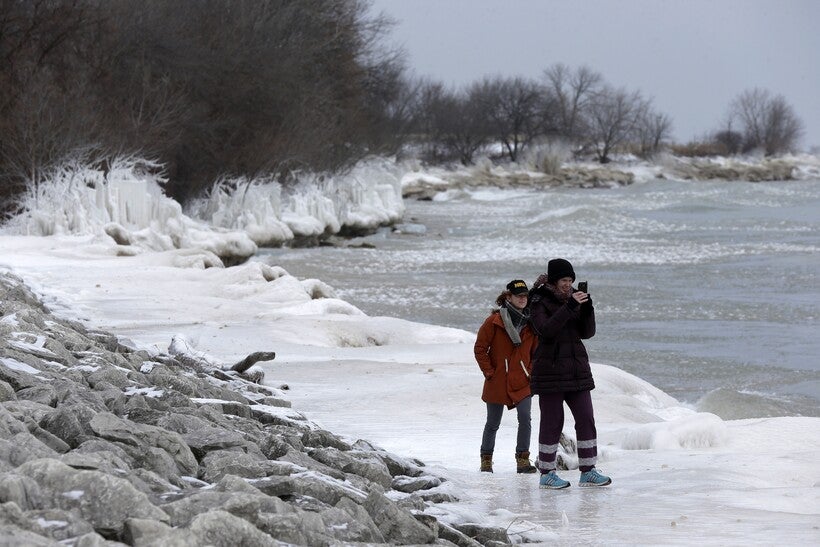 People walk on the ice covered beach along Lake Michigan, Sunday, Jan. 7, 2018, in Milwaukee. Cold temperatures for days have gripped wide swaths of the U.S. from Texas to New England. Kiichiro Sato/AP Photo

Winter weather advisory in effect through Wednesday for much of the state
By Danielle Kaeding
Updated:
Tuesday, January 4, 2022, 4:30pm
Share:

Parts of northwestern Wisconsin are bracing for near-blizzard conditions that could bring more than a foot-and-a-half of snow to areas near Lake Superior as a winter storm warning is in effect late Tuesday through Wednesday.

The rest of the state is under a winter weather advisory as high winds are expected to cause blowing and drifting snow in lesser amounts, ushering in bitter cold.

The National Weather Service in Duluth has issued a winter storm warning for Douglas, Ashland, Bayfield and Iron counties in far northern Wisconsin from 9 p.m. Tuesday to 9 p.m. Wednesday.  Around 6 to 12 inches of snow are expected to blanket the area through Wednesday with higher totals possible elsewhere.

"We could expect snowfall amounts anywhere between 10 to even up to 18 inches at the highest — particularly along like the higher elevations of northern Iron County," said Justin Schultz, a meteorologist for the National Weather Service in Duluth.

A winter storm moves in tonight, lasting thru Wednesday, bringing widespread snow. Lake-effect snow along the North and South Shores of #LakeSuperior will support heavier totals. The Wednesday AM commute will be very hazardous, so take it slow on the roads! #mnwx #wiwx pic.twitter.com/orkWIPXhSB

In an update Tuesday afternoon, the National Weather Service said as much as 22 inches could fall in some areas of Iron County. Vilas County and Lac du Flambeau are also under a winter storm warning from 9 p.m. Tuesday through 6 p.m. Wednesday.

Wind gusts of up to 40 mph will cause drifting snow along the south shore of Lake Superior, reducing visibility to near-whiteout conditions along U.S. Highway 2 near Ashland and State Highway 13 along the Bayfield Peninsula. The storm is expected to ramp up close to midnight, prompting concerns for the Wednesday morning commute.

"The main thing we want people to at least think about is perhaps delaying travel. If you’re capable of staying off the roads, please do so because the roads are going to be pretty hazardous," said Schultz.

The National Weather Service has also issued storm and gale warnings along the western edge of Lake Superior tonight through Wednesday as 10 to 20 foot waves are expected in many areas.

Schultz said 25-foot waves are possible for the outer islands of the Apostle Islands National Lakeshore. Lakeshore flooding is not expected to be an issue as water levels on Lake Superior have dropped by a foot in the last year.

For the rest of the state, anywhere from an inch to 6 inches of snow is expected Tuesday night through Wednesday with lesser amounts expected across southwestern to southeastern Wisconsin.

"Not a lot of snow, especially for locations south of the Interstate 94 corridor, only a dusting. But, what does fall will definitely be blowing around," said Andy Boxell, meteorologist with the National Weather Service Milwaukee/Sullivan.

A Winter Weather Advisory is in effect for our area from 12AM to 6PM Wednesday. Strong gusts from 40-45 mph are anticipated to blow around light snowfall and the powdery, pre-existing snowpack. This will create low visibility and slick spots from the redistributed snow. #wiwx pic.twitter.com/EBze8mdTaA

Boxell said the Wisconsin side of Lake Michigan is not expected to see high waves with west winds gusting to 45 mph across the region. Gusts as high as 40 to 50 mph are expected across much of the state.

The wintry conditions are expected to herald in colder temperatures for southern Wisconsin, falling into the teens on Wednesday. Wind chills between five and 15 degrees below zero are expected.

Across northern Wisconsin, Schultz said temperatures will hover around 20 degrees overnight before falling into the single digits by Wednesday evening. As the storm dissipates, wind chills of 25 to 35 degrees below zero are likely Thursday night through Friday by Lake Superior.